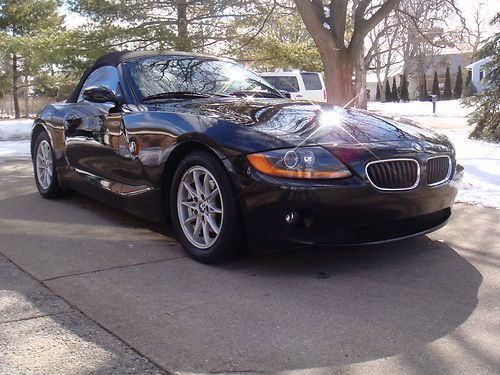 This 2003 BMW Z4 is my father car, purchased from the original owner in 2009 (miles at that time 41,401) You have to understand that my father is a "car guy" and has taken painstakingly great care of this BMW. He always said he would have it forever so it was meticulously cared for. Serviced at Okemos Auto Collection BMW since new, the car has needed very little in terms of service. Since owning the car, other than yearly service, it has had the wiper motor replaced (wipers would not park correctly) and at 80,000 miles the front brakes pads, rotors and wear senor were replaced. At the same time the brake fluid was flushed. Tires are in good condition with a small amount of road noise. I would estimate that they could be driven for 10's of thousands more miles.
The top is in like new condition, as the car has always been garaged. Each year it has had the recommended cleaning and application of roof dressing to keep it clean and spot free.
The car includes 2 original keys, flooormats and full owners manual package with all original books.
Because we want to make sure you know exactly what you are getting and to be fully satisfied with your purchase, I want to disclose the flaws. There are several small stone chips on the front end, typical for the year and mileage. There is a small door ding on the driver door that would not show up in photos (no paint damaged) and there is a scratch on the driver side lower air dam in front. Everything else should be as you would expect.
This is truly a great car that you can purchase and get exactly what you want. I have bought and sold several cars over the years on ebay and believe in treating buyers as I expect to be treated. I have also had nothing but positive feedback.

If you have any questions regarding the car, please feel free to ask. I will also be happy to provide photos of anything else you may want or need. Miles will be exactly the same other than for local test drives.The car will remain garaged throughout the auctions end. I will keep it garaged up to 7 days following the action end for your pick up. If you need a time frame outside that, please ask and lets discuss. I will be happy to coordinate with your shipper (at your cost) but I am unable to ship the car for you or arrange shipment outside the country. Please plan on making a $500 deposit at auction end and full payment within 7 days.
Thank you for looking and bidding. Good Luck!