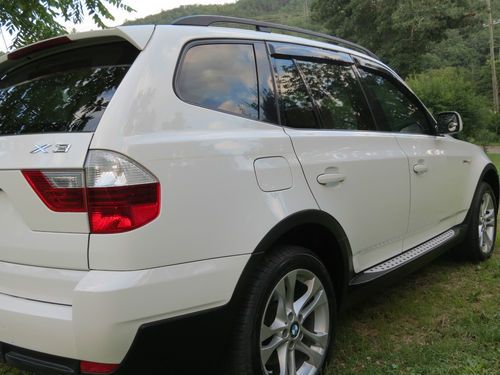 Condition: UsedA vehicle is considered used if it has been registered and issued a title. Used vehicles have had at least one previous owner. The condition of the exterior, interior and engine can vary depending on the vehicle's history. See the seller's listing for full details and description of any imperfections.Seller Notes:"Excellent condition!!"
FOR SALE BY OWNER 2008 BMW X3 3.0SI AWD
68000 MILES GARAGE KEPT,A/C ICE COLD,ALL SCHEDULED MAINTENANCE DONE BY BMW,12600 MILES IS WHEN THE NEXT SERVICE IS DUE!! AND BRAKES
ARE AT 70% HAVE ALL 9 MANUALS THAT
CAME WITH IT FOR EVERYTHING, AUTO TRANS,
AUTOMATIC TRACTION CONTROL,
LOADED & IN MINT CONDITION ALL
LEATHER, PANORAMIC SUNROOF, PREMIUM SOUND
SYSTEM,SECURITY SYSTEM, BMW
ASSIST,BLUETOOTH SO YOU CAN TALK HANDS
FREE,FACTORY NAVIGATION,AUTOMATIC WIPERS,ELECTRONIC OIL LEVEL MONITOR,< NO POPING HOOD TO CHECK OIL ALL YOU DO IS PRESS A BUTTON TO CHECK OIL,DYNAMIC STABILITY
CONTROL[DSC],DYNAMIC TRACTION CONTROL,HILL DESCENT CONTROL[HDC],TIRE PRESSURE MONITOR,NITROGEN FILLED TIRES,POWER OSCILLATING HORIZONAL AND VERTICAL XENON
HEADLIGHTS AND FOG LIGHTS,HAS EXTERIOR LIGHTING ON BOTH OUTSIDE MIRRORS,BOTH FRONT AND REAR HEATED
SEATS,HEATED STEERING WHEEL, BOTH FRONT SEATS ARE POWER AND LUMBAR SETTINGS,I LOVE MY BMW THE ONLY
REASON I AM SELLING IS I NEED A TRUCK TO
HAUL A FIFTH WHEEL CAMPER AND CANNOT HAVE
BOTH,LOOKS,RUNS AND DRIVES LIKE BRAND NEW,SEATS LIKE NEW "MUST SEE TO APPRECIATE"GOOD GAS MILEAGE ,CLEAR TITLE IN HAND,INTERIOR IS MINT CONDITION,PLEASE SERIOUS INQUIRIES ONLY,NO TRADES,CASH ONLY
SALE,ASKING $ 21000.00 OBO THIS VEHICLE IS ALSO LISTED IN AUTO TRADER AD ID # 102683579