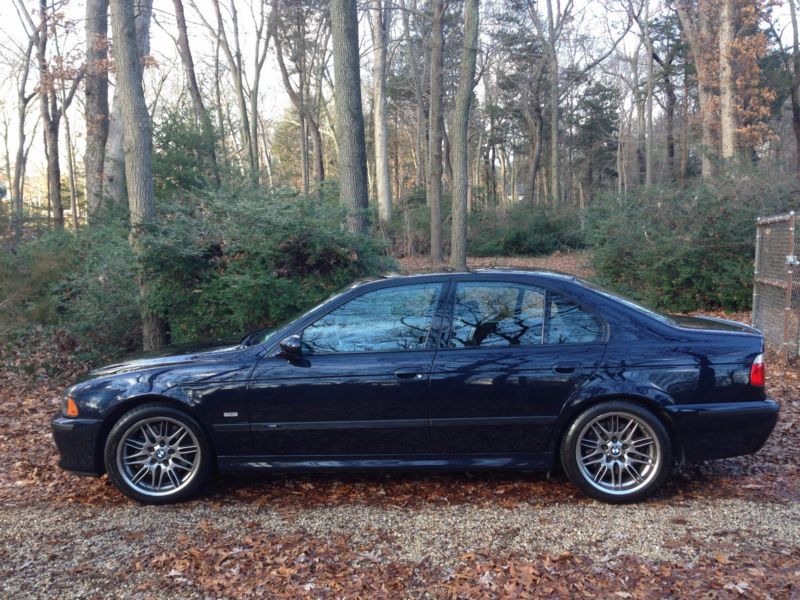 If you have any questions please email at: cris.buikema@vfemail.net .

For sale is my stunning 2002 BMW M5 E39. The car is absolutely flawless, pristine, and showroom condition and in a
very unique and rare color (carbon black by BMW code, which is actually extremely dark metallic blue). I would rate
this car 9.5/10. This is by far one of the best quality examples of M5 out there. I am a BMW enthusiast and have
taken great care of this car. It was serviced at a BMW dealership and I have all the service records. No expense
has been spared and I took absolutely the best care of it. Maintenance was performed regularly and all service
records from BMW dealership available.
This BMW is for the true enthusiast collector. It is considered perhaps the best M5 ever made given its timeless
design, absolutely immense power and speed (in 2000 this M5 was the fastest 4-door car in the world), a silky
smooth naturally aspirated V8 and of course, the only gearbox available on this car – a true 6-speed manual
transmission. This is 2002 so it has all the updates such as angel eyes and other things that were not available on
a 2000 version. This car is also fully loaded with custom original options such as extra soft leather seats and
leather stitched dashboard (see pictures attached…most other E39 M5s have plastic dashboards, not wrapped in
leather like this one). The car is also fitted with suede roofline, a CD changer and even a cassette player.
I won’t spend much time about the mechanical portion as it is truly 10/10. The car needs absolutely no work and
last had its checkup a few weeks ago (I put brand new disk brake rotors and brake pads in the front). The car is
also fitted with nearly brand new Michelin Pilot Super Sports tires, undoubtedly the best tire on the market today
(standard option for new Ferraris and Porsches and was actually designed specifically for Ferrari 458 Italia).
Engine works flawlessly, transmission and gearbox works perfectly and like brand new.
Interior-wise, there is also not much to say as it is nearly perfect for its age. No rips, tears, scratches, or
anything of that sort.