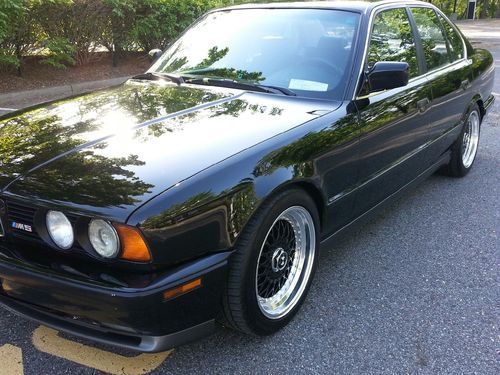 Your Bidding On A 1991 BMW M5 Last Of The Last Hand Made. Fully Loaded Black On Black w/199,00 Miles - Factory 315HP 3.6L 6 Cylinder Power Windows, Power Locks, Power Brakes, Power Steering, Power Seats Driver & Passenger, Heated Seats, Black Leather Interior. As You Can See From The Pictures, The Car Is In Great Condition And Looks Amazing. Body & Paint Show Very Well, Considering It Is A 22 Year Old Car. Some Chips, Dents & Scratches, As You Would Except, But Nothing Serious. Interior Is In Great Condition. Seats Look Like New With Very Minimal Wear & No Tears There Is A Piece Of Leather On The Passenger Door Coming Off. The Engine Starts Right Up & Runs Strong. Transmission Has A Short Shifter & Shifts Smooth Through All Gears. No Abnormal Noises Or Oil Leaks Of Any Kind. It Doesn't Have A Converter But I Do Have It If You Need It, Has 235/45ZR17 Continental Tires w/NEW 17x8.5 Axis Klassic Wheels Black With Polish Lips & Custom BMW Center Logo's Giving It That 90's Vintage Look. The Only Issue's With The Car It Has Very Slight Rust On The Corner The Doors Witch Is A Quick Fix. The Glove Box Does't Open Needs A New Latch. Missing The Rear Bumper Tow Cover & The Front Left & Right Cover By The Fog Lights. Other Than That This Car Is An Awesome Car Turns Heads Everywhere It Goes. Very Fun Car To Drive. Has New Pioneer Radio Plays Mp3 Ipod Or Your Gig Stick. Any Questions Please Contact Me Thru Email, Phone Or Text 1-201-790-0061 Thank You For Looking!!!!!!