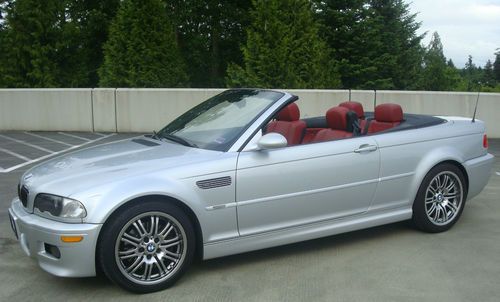 Just in time for summer...

You are bidding on a 2002 BMW M3 Convertible.  Experience open air, sports car performance in a four-passenger car you can drive every day.  The 3.2L inline six-cylinder engine generates 333 hp, has an 8000 RPM redline and a 0-60 time of 5.4 seconds! Combine this with phenomenal handling and braking and you have the complete package for a true driver's car.

You are purchasing this car from its original owner, who ordered it to his specifications from BMW Seattle in 2002.  It has been garaged since new in a smoke-free environment and has never been smoked in or even driven by a smoker.  No pets have ever ridden in this car.  The fully-automatic power top works excellently and has never leaked.  This car is all original and can be enjoyed as is or customized to suit your tastes.

This car is equipped with a Formula One-derived Sequential Manual Gearbox (SMG). SMG is a real manual transmission with a hydraulically-actuated clutch in place of the clutch pedal. It gives you lightning-fast shifts from steering wheel-mounted paddles or the console-mounted shifter, while being easy to drive around town or in stop-and-go traffic.

This car is finished in a rare and stunning color combination of a Titanium Silver exterior and Black roof with an Imola Red and Black interior that is a constant source of compliments.  It comes with a full complement of standard features including BMW M suspension and rear differential, automatic climate control, and rollover protection. It is well optioned, including Harmon-Kardon premium sound, xenon headlights with light sensor, rain-sensing wipers, rear parking sensors, and rear side airbags.  In addition to the factory options, the car has a 3M Clear Bra that was installed when the car was new and comes with a genuine BMW wind blocker ($500 if purchased new).  iPod connectivity was added in late 2011, though the iPod plug is currently damaged and needs to be repaired. The standard 18" wheels are wearing Michelin Pilot Sport A/S Plus ultra-high performance all-season tires; the rear tires have less than 14K miles on them and the front tires have 10K miles.

The car has been serviced regularly since new only at authorized BMW dealers and an independent shop that specializes in BMWs.  Detailed service records are available upon request.

The car comes with its original keys and full set of manuals, the original Monroney (window) sticker, and even the original brochures.  You will not find a nicer specimen of this model!

I love this car and still drive it regularly, but have to make room in my garage for a new car that's on the way.

Please contact me if you have other questions or would like to see additional photos of the car and its documentation. Serious inquiries only please.

Terms of Sale
The buyer is responsible for arranging pick-up or transport of the vehicle from the Seattle area. Only a cashier's check in U.S. dollars from a U.S. bank will be accepted.

The car has personalized license plates that are the property of the seller. The buyer agrees to transport the car without the plates or to return the plates to the seller within one week of the sale.

The odometer mileage reported above is as of 5/28/2013. Mileage at delivery will be slightly higher.

This car is offered for sale "as is". No warranty is provided by the seller.