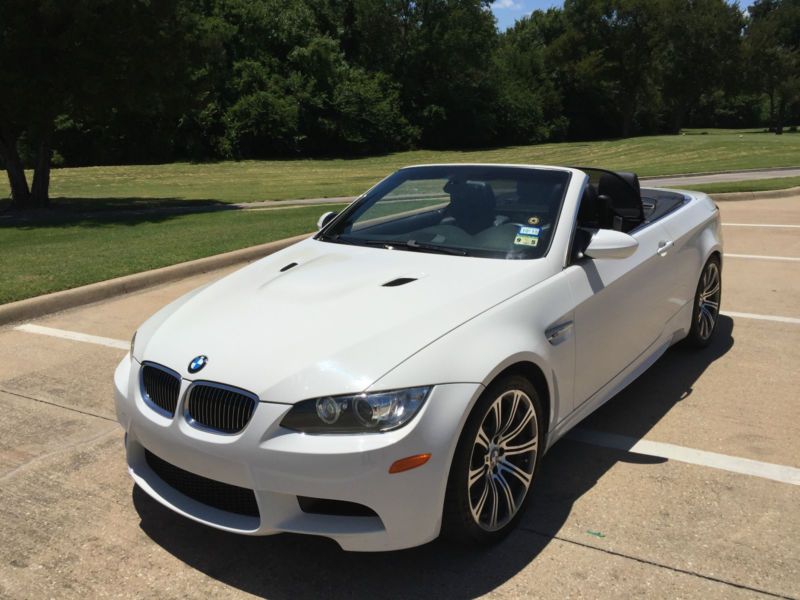 Up for sale is an adult driven, BMW dealer maintained, always garaged 2009 BMW M3 Alpine White Convertible with a
low 53,000 miles loaded with every option available for that model year. The car is riding on the amazing Michelin
Pilot Super Sport tires and 19" BMW M series rims. I had planned on keeping this car, however, I am relocating to
Europe and the M3, as much as it pains me to do so, must go. Vehicle was involved in a minor parking lot incident
that resulted in a rear bumper repaint, absolutely no structural damage. Includes a genuine BMW Wind Deflector and
carrying case. The headlights have been upgraded to plug-and-play Lux Angel Eyes to give this M3 nice bright white
angel/halo lights (original bulbs included in sale). In addition this M3 convertible also include an already
installed, behind the right rear passenger seat, an e93 Smarttop unit that allows much greater control over the
convertible top and windows. Just some the features of the Smarttop unit are:
Remote Control Of Convertible Top
Open/Close your convertible top using the original factory remote control key/key fob.
One-Touch Power Convertible Top
"One-Touch" convertible top operation allows your top to open or close automatically.
Individually Programmable
Configure all functions of the module to meet your personal preferences via the signature blinker setup menu
Reversible Plug-In Installation
Remove anytime allowing sale or return of a leased vehicle in it's original condition.
Trunk Comfort Access
One-Touch comfort trunk access for the top.
Comfort Window Close
One-Touch operation when closing all windows simultaneously via the separate driver's door.
Automatic Door Unlocking
Automatically unlock the doors when turning the ignition off. No more pulling the door handle twice.
All Door Unlocking (Comfort Access)
Touch sequence on driver's door handle opens all doors.
USB Port For Easy Setup / Updates
This module can be configured and updated using any Mac or PC.

BMW has teamed up with Chinese automaker Brilliance Automotive to create a joint venture in China, called Zinoro, and it appears that an all-electric version of the X1 crossover is to be the brand's first model. Spotted testing in Munich, these spy shots show a more camouflaged version of the X1 EV that we saw back in April.
Comparing these latest spy shots, we can see that the Zinoro model will wear a completely unique front fascia that ditches BMW's trademark grille, but few other changes seem to be taking place. Previous reports indicate that this Zinoro EV could go on sale in China early next year.