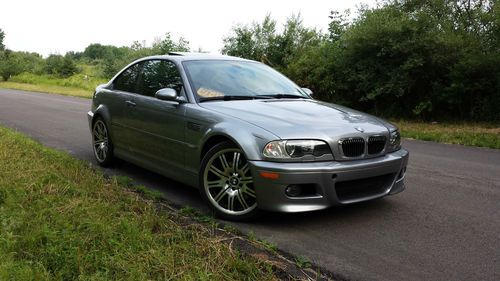 Condition: UsedA vehicle is considered used if it has been registered and issued a title. Used vehicles have had at least one previous owner. The condition of the exterior, interior and engine can vary depending on the vehicle's history. See the seller's listing for full details and description of any imperfections.Seller Notes:"Small Scratches And dents Barely visible."

Up for sale is my wonderful and rare M3! Need to sell it due to life situations.
Nothing wrong with it what so ever! Extremely clean coupe with a beautiful grey/blue factory paint scheme. Harmon/Kardon speaker system, wonderfully convenient SMG transmission(shifts so nice), black leather interior, buisness cd, ect. It has 55,500mi and counting as im cherishing every moment I have with her until she must go. Once you do your research and youtubing youll realize what a wonderful piece of machinery the Bmw Made M class 3 series is. I just love it!
It has a rebuilt title. Drives like its right off the lot! There are also a few very minor scratches and small dents(not visible unless I point them out), also the front bumber tow hook cap is missing. All fluids flushed and refilled with brand new material. Brand new wipers, battery, and tires on all 4 corners! 19" wheel option and more! It also has csl tail lights, and Hotchkins sport swaybars (minimizes the already minimalized M3 body roll!Also has a aluminum plate to protect the oil pan underneath. Handles like a dream, you'll be awed! Call/text 6076212sixThree3 for any other questions, maybe we can make a deal.

Please, serious bidders only!! First time buyers Call me First for approval, otherwise your bid will be removed! Please, no games. This is a wonderful piece of machinery that speaks for itself. We all know it's value.