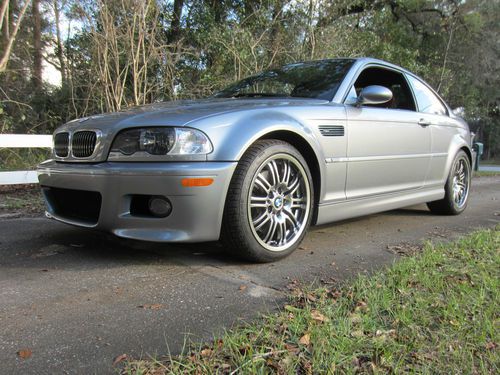 Condition: Used: A vehicle is considered used if it has been registered and issued a title. Used vehicles have had at least one previous owner. The condition of the exterior, interior and engine can vary depending on the vehicle's history. See the seller's listing for full details and description of any imperfections. ...
This is a 2004 BMW M3 with automatic SMG transmission.Its condition is like new with flawless paint and interior.The tires are brand new with less than 100 miles on them.The car has all options except navigation.It has always been in Florida and received BMW dealer maintainence.The car is garaged and only adult driven.Only 45K original miles,comes with all books and 2 keys.Call for more information 407 814 0624  Dave

BMW's current reputation of building Ultimate Driving Machines can be traced back through history all the way to 1966, when the German automaker introduced the world to its 1600-2 two-door at the Geneva Motor Show. The car's name was simplified in 1971 to BMW 1602, and it went on to spawn the 2002, one of the most famous BMW models of all time.
BMW looks back on its past successes in a video that you can see below. As the automaker itself says in the video description, "This series was extraordinarily successful in reinterpreting the concept of the sports saloon and played a major role in motor sport long after production had come to an end." The 2002 would be replaced in 1975 by another legendary model from BMW: the 3 Series.
We'd be lying if we said we didn't long for something along the lines of the classic 2002 from BMW today. Since that doesn't seem likely to happen anytime soon, join us in remembering the cars that helped make BMW a household name by scrolling down below.