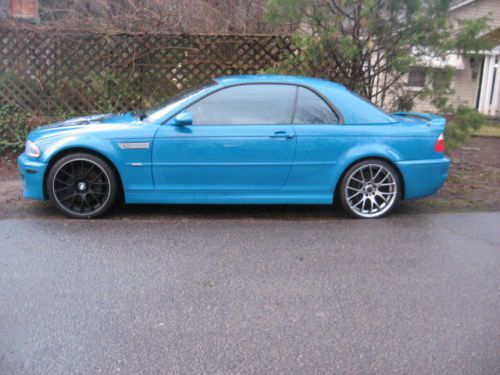 Remember how, when the first BMW M4 Concept images leaked earlier today, we told you the official information would be coming later this evening? Well, scratch that. The whole kit and caboodle is now online, meaning all the official details are below, as well as a full gallery of high-res images above.
The replacement for the M3 Coupe, the Concept M4 Coupe shares a number of styling similarities with its dearly departed forbearer. To us, it's kind of like a mishmash of greatest hits from the new 4 Series and the old M3. The 4 Series headlights have grown on us, and the side grilles, which are part of BMW's Air Curtain and Air Breather system, are functional.
The power dome in the hood is smaller than on the M3, but is of a similar shape, while the rear diffuser and exhaust treatment look like they're lifted straight from the old car, aside from being finished in carbon fiber. Speaking of which, the carbon fiber roof sports a new touch, a cool BMW M tri-color that runs the length of the roof on the driver's side. The 20-inch M alloy wheels come in a twin five-spoke design, which has sort of become a calling card of BMW's M cars in recent years. Hiding behind those meaty wheels are M's carbon-ceramic brakes.