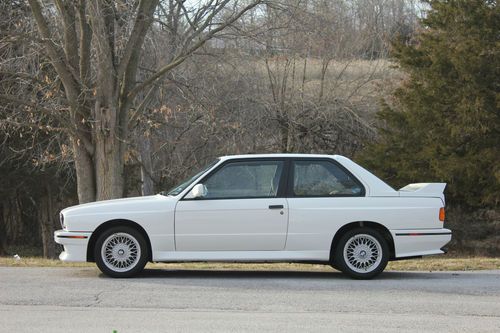 BMW shows off 435i Coupe with M Performance parts

Greetings from the famous Circuito do Estoril racetrack in Portugal. We're here to put the 2014 BMW 4 Series coupe through its paces, and we'll have the chance to sample the updated 2014 BMW M5 with its new Competition Pack, as well. But before going out for some hot laps, we took a few minutes to check out this 435i Coupe that's been fitted with a full suite of goodies from the BMW M Performance parts catalog.
Starting with the exterior, carbon fiber bits are the most noticeable additions, with the lightweight material added in the form of a massive front splitter, mirror caps and a rear spoiler. Other visual changes include lightweight 20-inch wheels, a blacked-out grille, and unique M Performance side stripes. No, that's not a shadow you see under the 435i's strong side character line - that's a stripe. Yes, we're serious.
Inside (we couldn't get photos of the interior, sorry!), BMW has added its sport steering wheel with race display, unique M floormats, steel pedals, and a whole mess of carbon fiber and Alcantara trim.