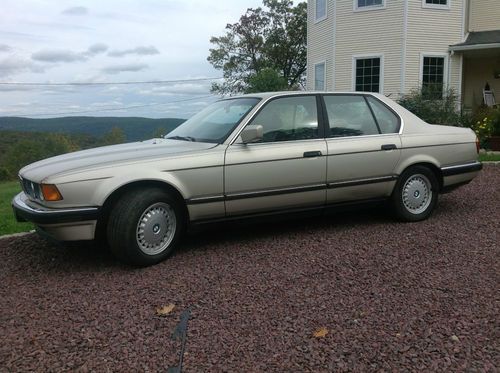 Classic 1988 735i BMW 4 door Sedan. Bronzit Beige with Natur interior. 4 speed automatic transmission with Economy, Sport and Manual electronic control. In 1988 this car retailed for $48,500. I bought this car in 1995 and am the second owner. The car was taken off the road in 2007 and put in my garage until 6 months ago when I had to make room for another car. I hate to see it sitting outdoors. This beauty needs someone to put some time into it to make it road worthy again since it has been sitting idle for so long. Engine starts right up but needs overall tune up. Has leak in the transmission coolant line but the engine still had power left in it the last time it was on the road. Needs to be towed off property as vehicle will not hold transmission fluid because of leak. Needs new battery. 205,711 original miles, mostly highway miles. Interior and exterior are still in good condition considering it is 25 years old! Has original 1988 Brochure that came with the car as well as parts catalog. Never been in an accident.Car is sold in AS IS condition. Cash sale only.