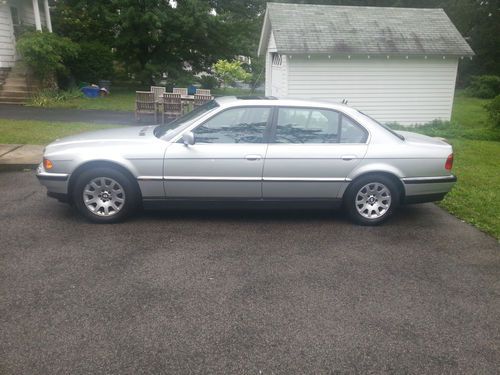 Condition: UsedA vehicle is considered used if it has been registered and issued a title. Used vehicles have had at least one previous owner. The condition of the exterior, interior and engine can vary depending on the vehicle's history. See the seller's listing for full details and description of any imperfections.Seller Notes:"THE NAVAGATION SCREEN IS DIM BUT IT WORKS ALSO THERE IS 1 MINOR DENT ON THE HOOD AND 1 SLIGHT SCRAPE ON THE RIGHT SIDE BY THE REAR WHEEL AND THE GREY DYEON THE SEATS IS WEARING TIRES ARE GOOD AND THE CAR CAR RUNS AND HANDELS GREAT."

CAR IS IN GOOD SHAPE BROUGHT THE CAR IN 2002 FROM BMW PRE CERTIFED AND HAS BEEN GARAGE KEPT. ALL HIGHWAY MILEAGE AND IS VERY CLEAN I HAVE ALL THE BILLS FOR THE WORK THAT HAS BEEN DONE. NEW BATERY JUST INSTALLED. THE ONLY REASON WHY I AM SELLING THIS CAR IS BECAUSE I BOUGHT A NEW ONE LAST YEAR. I WAS GOING TO GIVE THE CAR TO MY SON BUT HE WANTED I SMALLER SPORTIER CAR SO ITS ON E BAY  HAPPY BIDING