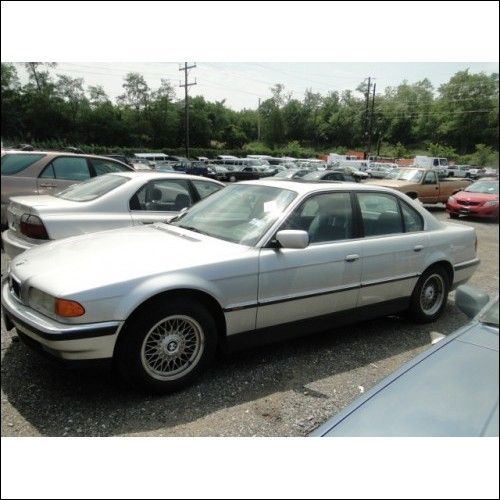 I think this is a 1 owner car. Please check, i will look for my AUTOCHECK.

I'm selling a very nice looking 740i, that's the reason i bough it was it's looks, as low miles. I bough from a goverment public auction. Made a key at BMW and then found out that the motor cranks but the top timing chain does not move by the view of oil filler cap. Prior to that i removed dressing covers to replace 8 plugs. I have all the covers.

Car is complete, nothing has taken apart.

230 ish K miles, looks awsome, I dont have the time or $ to work on it. Selling as is where is with NO RESERVE, car must go.

I will answer all question within mins.

BUYER MUST COVER PAYPAL FEE after first 200. Thank You.

Car will sell here on ebay, due to cold weather car has not been washed prior picturing.

BMW i8 fully revealed ahead of Frankfurt debut

It may be early in the morning here in the US, but in Germany, the first day of the 2013 Frankfurt Motor Show is in full swing. BMW took advantage of the early start and showed off its long-awaited i8 plug-in hybrid sportscar, a two-plus-two, swan-wing-doored coupe, to the Frankfurt crowd.
We drove a BMW i8 prototype back in August, so many of the things we're reading today are clarifications on our initial suspicions or speculations. Underhood sits a 1.5-liter, turbocharged, three-cylinder engine. On its own, it churns out a respectable 231 horsepower and 236 pound-feet of torque, which is then channeled to the rear wheels by way of a six-speed automatic transmission. An electric motor, meanwhile, sends 131 hp and 184 lb-ft of torque through a two-speed automatic to the front wheels.
With all-wheel drive at its disposal, the total system power sits at 362 hp and 320 lb-ft of torque, and allows the i8 to scamper to 62 miles per hour in just 4.4 seconds. That excellent performance is offset by an estimated fuel economy figure of 94 miles per gallon, though, making this a fast and efficient vehicle. Charging is impressively fast on the i8, with a full charge coming from a 110-volt outlet in under four hours. A BMW Charging Station will trim the charge time down to 1.5 hours.