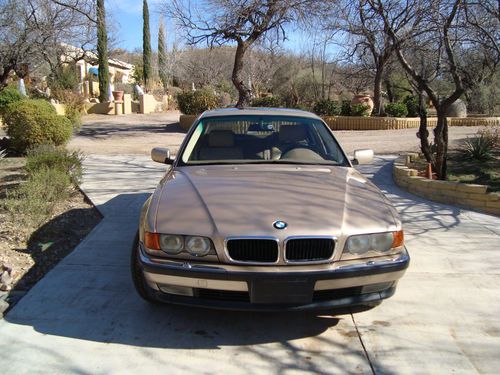 for sale is a 1999 BMW 740I with 136.000 miles in great running condition ; this luxury car needs nothing!! everything in the car works , cassette, 5 CD deck in the trunk , heated seats , radio . No tears in the leather seats front and back . Power window , power locks, power sunroof , premium sound system , power adjusted and heated steering wheel and side view mirrors and heated seats . All in working conditions.

the following has been performed in the last two year :
new tires
new water pump;
new drives belts
new shock  all around
brakes and rotors resurfaced
transmission fully rebuilt
The new owner will have a peace of mind knowing that they will not have to spend any money in repairs . The car drives excellent 10 out of 10 > The exterior conditions are very good ; the interior also are very good with only very minor cracks on the driver seat but no rips or tears > I am changing this car for a 4 door truck to tow my new boat and family transportation

Jay Leno puts eight wheels on display this week for Jay Leno's Garage from a quartet of retro-inspired BMW motorcycles. They are the creations of husband and wife team Larry and Carol Romestant, who build each one in their home garage.
Larry is a former aerospace engineer who loves BMW bikes, especially the K models. Now, he's combining his passion with a real talent for fabrication to build his own cycles with his wife. With Larry and Carol the only ones working on these projects, it takes them six to nine months to build each one. In addition to the old-school looks, the motorcycles are supposed to be a bit more user friendly than stock. For example, one of them ditches the standard five-speed gearbox in favor of a six-speed unit to be a little more comfy when cruising at high speeds.
Since there isn't enough time to take all four of them for a ride, Jay picks his favorite to test out on the open road. Scroll down to see which one he chooses.