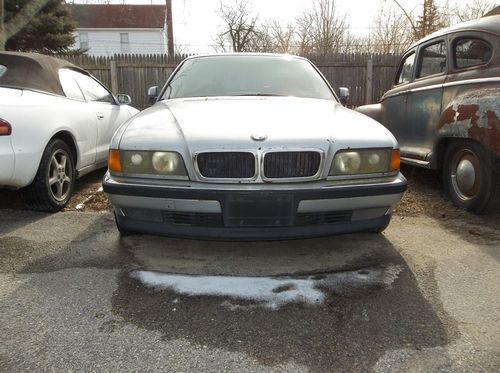 HELLO. UP FOR SALE IS MY 1998 BMW 740 IL. THE ENGINE DOES NOT TURN. WHY I HAVE NO IDEA. IT MIGHT BE SIEZED OR IT MIGHT BE AN ELECTRICAL PROBLEM  TO THE STARTER MOTOR. I INHERITED THIS CAR AND I HAVE NO INTREST IN FIXING IT. SO ITS UP TO YOU TO DIAGNOSE THE ENGINE PROBLEM. AS YOU CAN SEE THE BODY HAS NEVER BEEN IN A COLLISION, AND IS STRAIGHT,  BUT  IT WAS THE VICTIM OF VANDALISIM.  SOME SCRATHES  AND DENTS ETC.  HOWEVER THE GLASS IS ALL GOOD AND THE INTERIOR IS IN NICE SHAPE. LEATHER SEATS SUN ROOF KILLER CD STEREO, POWER EVERYTHING  AND CRUISE CONTROL. ALL THE THINGS  THAT MAKE A LUXURY CAR SO SWEET. THE CAR IS VERY RESTORABLE AND IS PRICED FOR QUICK SALE. I  DO HAVE THE PLASTIC COVERS THAT GO ON THE ENGINE AND THEY WILL OF COURSE BE INCLUDED  PLEASE CALL ME BRIAN AT 631 591 0944 THANKS.