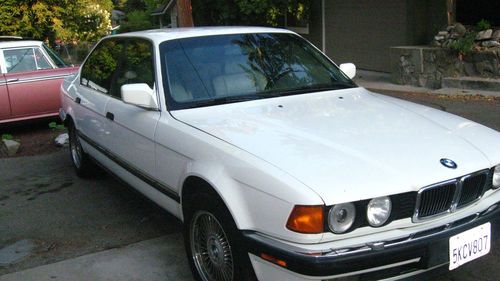 Condition: UsedA vehicle is considered used if it has been registered and issued a title. Used vehicles have had at least one previous owner. The condition of the exterior, interior and engine can vary depending on the vehicle's history. See the seller's listing for full details and description of any imperfections.Seller Notes:"One headlight doesn't work (wire needs replacing), needs to be warmed up when it is cold and I believe it has an exhaust leak, AC doesn't work and many interior lights don't work either - I believe this will be remedied with some electrical work. Door locks aren't working (probably need to take the door panels off and do some tune ups)and back passenger door doesn't latch tight (latch needs something). . Also front suspension needs reconditioning. Needs front bumper trim and one rear tail light lens is broken (light works)."

I drive this car every day and would not hesitate to take it on a road trip.

I have driven it round trip from So Cal to Mammoth in one day - no issues.

I have listed to the best of my ability all of the mechanical issues that I have with this car.

I don't have the time or patience to spend fixing this car up to its potential.

It is just about 20 years old so the leather seats are a worn in and there are some scuffs.

The interior wood trim is all intact - there are some little hairline cracks in the driver door trim - but it is not separating at all.

It likes to warm up a bit before driving (when it's cold it likes a good minute or two at 1500 RPM).

Clear coat is peeling - dent under trunk lid on passenger side, dent on rear passenger door

On the freeway this car flies.  It is responsive and I love taking it on road trips - no hesitation in this vehicle if you need to pass.

I love this car but I just don't have the time or energy to fix it up.

One headlight doesn't work (wire needs replacing), needs to be warmed up when it is cold and I believe it has an exhaust leak, AC doesn't work and many interior lights don't work either - I believe this will be remedied with some electrical work.  Door locks aren't working (probably need to take the door panels off and do some tune ups) and back passenger door doesn't latch tight (latch needs something).  Also front suspension needs reconditioning. Needs front bumper trim and one rear tail light lens is broken (light works).