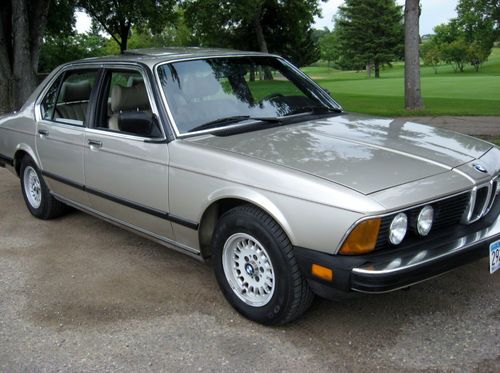 I always enjoy driving this classic eye-turning BMW into the Country Club on a Saturday morning! This pristine 1984 BMW 733i is in incredible condition as she was owned by an elderly woman who drove in the summer time, and as her health changed it stayed garaged, only to be taken out occasionally and driven by her son to keep it fresh. (I have documentation and contact information to verify this history as well has maintenance, repairs, etc.).  I purchased the car this spring,as a great summer cruise car but due to my Parkinson's it is either sell or hire a chauffeur.

The BMW 733i (E23) is the first BMW 7 Series luxury car, produced by the great German automaker BMW. It features everything one would expect from the car that epitomized power and luxury in the mid-1980's. This car, at a young, well-maintained 116,000 miles features:
You will need to see it to appreciate it. I encourage potential buyers to hire an inspection (so there are no negative surprises).  I will assist you as your arrange for shipping.I can photograph any area(s) that you would like more specifics on, so email any questions.