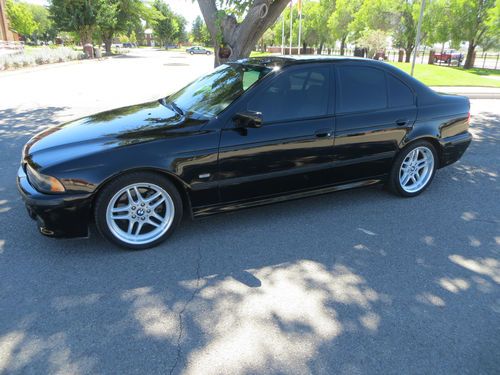 FOR SOME REASON THE VEHICLE CHECK SHOWS A TITLE PROBLEM/ODOMETER. THIS IS WRONG, I HAVE THE TITLE IN HAND, IT IS CLEAR AND STATES ACTUAL MILEAGE. THERE IS NO PROBLEM. IT MUST HAVE BEEN A CLERICAL MISTAKE AT THE AUCTION IT WAS REPORTED AT.I CAN ALSO SUPPLY A PICTURE OF THE TITLE SHOWING CLEAR AND ACTUAL MILES.

Here we have a Rare, Beautiful 2003 BMW 540i M-Sport 6 speed manual with only 98,460 miles! This car has new tires, new clutch, new ignition coils and runs and drives great! Black with Tan leather interior.

This car is a 2003, and is not a new vehicle, so there are some minor things that come with age. The paint is good, but does have some minor rock chips, dings, and scratches, but from 5 feet away looks excellent. The LED display on the stereo has some pixels out(see picture), the two cup holders in the center are broke and do not stay closed(see picture). The driver side seat back recline is not working, all other seat adjustments do work, up/down, forward/back, tilt forward and back.

For the year, this vehicle is in great shape with only minor issues, low miles, and runs and drives great! Less than 1,300 of these vehicles were sold in America, making this vehicle rare, and a sure collectors car.

I do also own a car dealership, so I am able to accept bank checks.  FOR SOME REASON MY PICTURES ARE NOT WORKING SOMETIMES, IF THERE NOT PLEASE EMAIL ME AND I WILL SEND THEM TO YOU