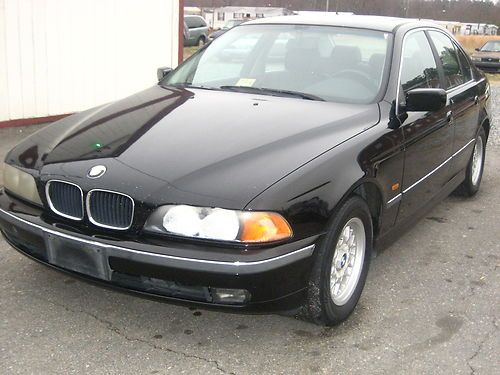 BEEMER LOVERS, HERE IS A BEAUTIFUL PROJECT CAR FOR YOU.

THIS 1998 BMW 528I HAS A SHARP LOOKING BLACK PAINT, THAT IS FREE OF RUST AND DINGS, EXCEPT FOR A SMALL SECTION ON THE ROOF, THAT THE CLEAR COAT HAS FADED.

THE BLACK LEATHER SEATS ARE QUITE NICE, BUT THE ARM REST IS TORN.  THE CARPETING IS ALSO BLACK, AND IT IS DEVOID OF SOILED OR WORN OUT AREAS.

DO YOU LIKE OPTIONS?  THIS ONE IS LOADED.  AC, AM/FM/CASSETTE/ CD CHANGER, POWER WINDOWS, LOCKS, SEATS, WITH MEMORY, SUNROOF,  TILT WHEEL, AND CRUISE CONTROL.

THE ENGINE STARTS AND RUNS, THAT YOU CAN FEEL THE EFFICIENCY OF THE TRANSMISSION AS IT GOES THROUGH ALL THE GEARS SMOOTHLY.  UNFORTUNATELY THE ENGINE SMOKES, AND OVERHEATS, WHICH IS A STRONG INDICATION THAT THE HEAD GASKET NEEDS TO BE REPLACED.

THE ODOMETER READS 216,053, BUT AFTER YOU SERVICE THIS CAR, YOU CAN EXPECT MANY MORE MILES.

THERE IS PLENTY OF MEAT LEFT ON THE 4 TOYO RADIAL TIRES, WHICH WRAPS AROUND 4 UNSCUFFED BMW ALLOY RIMS.

HEY BEEMER LOVER,  DON'T MISS THIS ONE, THERE IS NO RESERVE!

TRANSPORTATION IS AVAILABLE AT AN AFFORDABLE PRICE.

THERE IS $75.00 PROCESSING FEE ADDED TO THE FINAL BID PRICE.

WE RESERVE THE RIGHT TO END THE AUCTION AT ANY TIME.

IF YOU HAVE A FEEDBACK SCORE OF ZERO, OR HAVE JUST SIGNED UP WITH EBAY WITHIN THE LAST 60 DAYS, PLEASE CALL JOHN AT 804-347-1856 BEFORE BIDDING.

REMEMBER TO BID HIGH, AND BID OFTEN, THERE IS NO RESERVE.