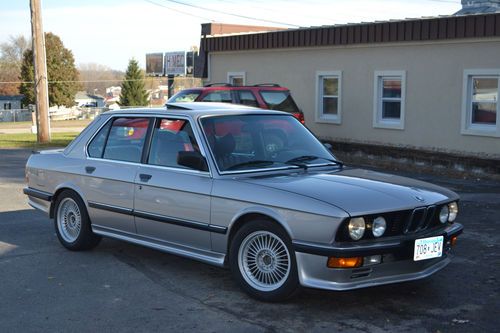 this fine example of the classic "E28" 5 series is in terrific condition, i drive it regularly on two and three hour daytrips.  It runs perfectly after having its valves adjusted and fresh tune up.  A/c has been deleted from the engine bay but all replacement parts are included.  The tires are in very near new condition. the exhaust is in good condition.  All the electricals work throughout the vehicle.  Interior is of the touring variety , standard on 528e, but not the troublesome and heavy power versions, this car is manual seats. The full euro conversion has been applied to this car with new grill and headlight assemblies, new old stock bumpers front and rear and a full Hartge t5 kit, front , rear and side skirts.  lowered with H& R spring s and bilstien hd's.  ported and polished throttle body included.

very reliable and fun to drive vehicle, creates a buz where ever i take it.....    "wow, this car is really clean" is the most common reaction.

feel free to call with any questions