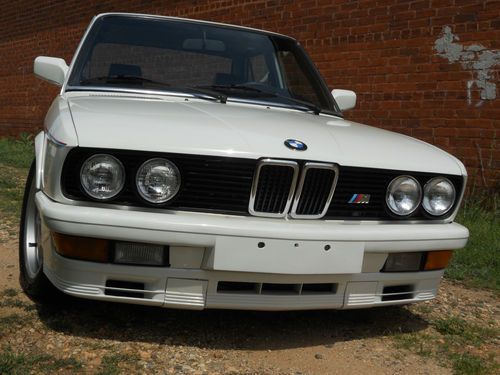 Original 1985 BMW M535i DINAN for sale. It is complete and mostly original and in overall better than excellant condition. Imported from Germany in 1985, it was subject to DOT and EPA requirements, which were completed. This car is beautiful, but please know it is 28 years old, so there are some minor flaws which I have listed below. Ebay does not recognize the VIN because it is a Euro, however it is WBADC710X00641184, not the vin listed above.

The beauty of this car is that it went to exclusive BMW tuner Steve Dinan's BMW garage, where it received a lot of goodies that improved its handling and of course came away with an ability to blow pretty much everything else off the road with the addition of tuning and a turbo. Driving the car is exciting. While it is still a 4 door sedan, a careful observer will pick up the nuances of the lowered body, fat wheels and tires (no TRx's, this car has later BMW E-34 "M System" 17" wheels) and the factory 9 piece bodykit, which lowered its drag coefficient. But the real fun and excitement comes when the turbo begins to spool up: its controlled only by your right foot---no electronic nannies here---realistically useable in third, fourth and fifth gear. Try it in second and it'll scare hell out of you! The rush of speed as the turbo gets spooled up will put a big grin on the driver's face--its fast even compared to today's hotrods!

I've been over this car carefully, and I guarantee its authenticity and its condition. The car spent some time up North (Ohio), where I was told it was only driven in "non-salt conditions". The car is rust free, but I did find some surface rust on under-body components, which have been touched up and you can see in the underbody pictures. I also had one area around the rear window cut out and new metal stitched in, a new gasket installed and re-paint across the lower window panel. The left rear door was repainted because a previous owner did not have a minor repair properly completed, and his re-paint did not match the original paint. At this time I also re-painted the hood due to some stains which would not buff out. The front fenders were repainted to ensure there is no mismatched paint. It is beautiful, as you can see in the photos, the quality of this work is absolutely flawless. The rest of the paint is original. To make the original Alpine Weiss paint pop, a Motorsport stripe was applied in lieu of the original "coach" stripe, which was black and gray.

There were less than 10,000 of these special cars made (9483 delivered worldwide) from 1981 to 1987, and just over half were 5 speed cars. This one has the original dog-leg, short ratio gearbox. It also has most options: black leather on the Recaro seats, limited slip diff, A/C, Cruise, anti-theft and stereo (replaced sometime in its life with a Stereo/CD player and equalizer with amp). The mileage is TMU, it shows 194xxx, but the speedometer was changed out when it was converted to US specs. It likely was a used unit with miles already on it, but there's no way to tell. The car drives like a proper E-28 should: it is quiet and tight, reflecting the superb build quality of the early BMW's. Fully optioned, including air conditioning, sunroof, radio, leather, headlight washers (removed when federalized), limited slip diff, and anti-theft. Full trunk tool box and jack, lug wrench and wheel stop. A couple minor discrepancies, but all in excellant condition, see the picture. Original spare TRX wheel and tire, NEVER BEEN USED. Extra spare in tire well is an unmatched BMW wheel that fits over the 750 caliper and rotor.

The engine starts immediately, no knocks, ticks, rattles or noises. It settles into a steady idle without revving or patting the gas pedal. The clutch is extremely smooth and without issue, because it is a new Sachs unit. The transmission shifts very positively and easily. No grinding of syncros or whining at any speed. This is a car that has been serviced for many years with Redline Oil, and that's whats in it now, and that's why it runs and shifts so smoothly!! Ditto the partial locking differential (an option). The accessories all work, even the overhead warning panel is clear, no lights. The interior is nearly perfect, no rips, tears or wear spots. I have lots of keys, one electric keyfob, a certificate of existence from BMW M, period poster of BMW M535 "Master Blaster", glovebox books (in english, not the originals, but for a 1985 BMW 535is), original horns, original brake calipers, couple oil filters, air filters and maintenance records back to 1997. There is a cover, but it has seen better days. There are M floormats, but see the trunk picture, original DINAN front mats!! Also included is a 5 series Bentley repair manual. Here's what I know needs attention, or things which are not original parts:

1. headliner stained around both C pillars. I've been told these can be washed out with the proper stain remover, but I have not tried it.

2. felt windlace has come off the rubber seal around 2 doors. This can be re-glued, but again, I have not tried it. They are still in place and not torn or rotten.

4. the M535 had a manual rear window shade, but this one is missing. The rear package shelf has been replaced with one that includes speakers.

5. dash has a felt cover which covers 3 cracks, not huge ones but they are there none-the-less.See the pictures.

6. under hood insulation is crystalized and turns to powder when touched. Easily replaced.

9. original MSport steering wheel has a 3/4" tear in the leather at the top. Nice leather cover on it now, original covering can be replaced when you're ready.

That's it. All pretty minor stuff I think considering the cars age!

Always garaged and cared-for, the car will win most car show concours and it shows beautifully! Because of its rarity, it stands out in any car crowd, and gets compliments everywhere it goes. It truly is a pleasure to own! More pictures are available, just send me your email address. You will not be disappointed, I guarantee it. You can fly into GSP (Greenville/Spartanburg) I will pick you up, you can drive the car home. Please, I am the owner, I have a clear SC title, and I will sell it for a reasonable price, so make your bid honest and valid. No feedback offers will be annulled unless you call me first. If you don't want to hassle with the auction, call me lets make a deal. Its time for a new owner! Bob at 864-316-6901.