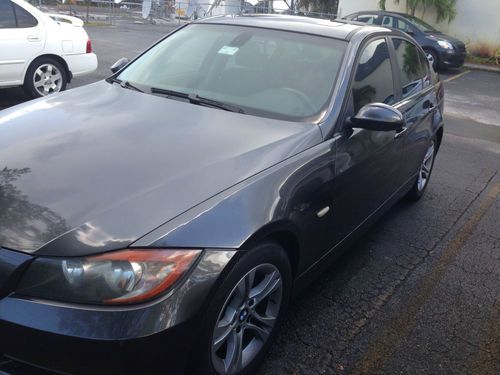 Condition: UsedA vehicle is considered used if it has been registered and issued a title. Used vehicles have had at least one previous owner. The condition of the exterior, interior and engine can vary depending on the vehicle's history. See the seller's listing for full details and description of any imperfections.Seller Notes:"Car is in excellent condition all leather looks new and rugs are in excellent conditon. The handle on passenger side could use a replacement(please see picture).Where seatbelts are fastened on passenger side there are scratches. In the back right door there are two small dings above door handle as well as one on hood of car.Car has normal wear in some areas as far as paint.One of the headlights has some fogginess on the actual casing of the light. Tire pressure sensor needs to be reset or replaced."
BMW 328i
Beautifully equipped BMW with Premium Package and Sports package which includes
Premium Package -
Automatic operation rear view mirror; Garage door opener; Coming home device; Driver and passenger seat with lumbar adjustment; Driver and passenger door mirrors with automatic operation; Compass; Includes: [459] Power Front Seats with Driver Memory And [639] BMW Assist with Bluetooth And [LC_] Dakota Leather Upholstery
Sport Package -
Sports passenger seat; Sports leather steering wheel
Everuthing in the car is fully functioning cold air, cup cooler in center console, lights , everything

Keyless entry
iPod/MP3 jack
Car was serviced less than 4 months ago
Car can only be local pick up in Miami, FL
Tire pressure sensor needs to be replaced
Car features :
2008 BMW 328i Sedan , ONLY 54K Miles, V6 3.0L over an automatic tiptronic transmission. 16In Wheels with 75%Tires Runflates!!!! This car is super clean, and drives perfect. Equipped with Leather Seats, Steering Wheel Audio/Command, Moonroof,, Power Windows, Power Locks, Keyless Entry, Privacy Glass, Fog Lights, Run-Flat Tires. This Car is a clean non-smoker vehicle ready for its new owner.
BEFORE YOU BID KNOW THAT WE REQUIRE A NON-REFUNDABLE $200 DEPOSIT WITHIN 24 HOURS OF THE AUCTION END IF YOU ARE THE HIGH BIDDER. Do not bid if you are not going to send this $200 deposit. If we do not receive the deposit we will not sell you the car. Full payment on the vehicle is due within 7 days of the auction end. No exceptions.Every vehicle we sell is subject to a $135 buyers fee. If you win this auction, the buyers fee will be due within 7 days along with the full purchase price