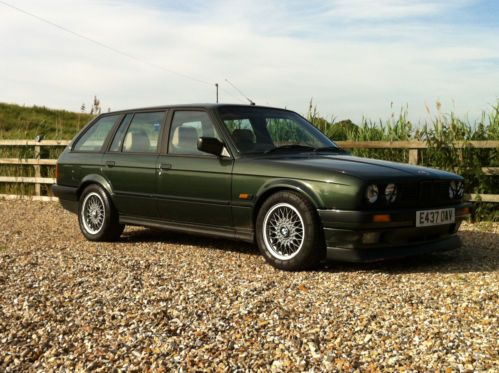 Condition: UsedA vehicle is considered used if it has been registered and issued a title. Used vehicles have had at least one previous owner. The condition of the exterior, interior and engine can vary depending on the vehicle's history. See the seller's listing for full details and description of any imperfections.Seller Notes:"See description"

For sale is my 1988 BMW 325 Touring in Malachite Green with right hand drive!

Engine: M20B25 6 cylinder
Transmission: 5 speed manual
Interior: Beige cloth sports seats
Wheels: Nograro Grey Motorsport Cabriolet 15" BBS "Euroweaves" with 205/55 tires
SE skirts and a iS style fiberglass front lip
If you know anything about E30 BMWs, you know how rare this car is in the US. I owned this car for about 2 years while living in the United Kingdom and have recently imported it back. The car has a March 1988 manufacture date and was legally imported under the 25+ year old provision just last month, September 2013. The car is fully registered in Oklahoma with a clear title in my name. I have not swapped the plates out yet, but I have included a picture of the OK plate. I am unsure how I would want to mount the plate so I will leave that up to the new owner.
Overall, the car is very solid, but not perfect. It is 25 years old after all. The paint has a couple of issues. There is a scratch down the right (driver's) side of the car. The sunroof has some scratches. The hood has a scratch and an area where the clear is peeling. One of the rear quarters also has a small area of clear peeling as well as a ding in a couple of scrapes. There is rust in the lower portion of the drivers front fender. The wheel arches and corners of the windshield are all rust free as can be seen in the pictures. I have tried to picture all the blemishes, no matter how minor. Please take a good look at them. If you need a picture of anything else, please let me know.
Mechanically the car is spot on. I have not had any issues in the time I've owned it other than the starter needing replacing. I would not hesitate to drive it on a cross country road trip. It has been lowered slightly, I'd say 15-20mm. Looks good and doesn't ride rough. The headlight wash/wipe doesn't work. There is a common problem with the motors needing taken apart, cleaned and re-greased. Everything is there though.
The interior is clean and damage free. The seats work as they should. The metal rod that holds the load bay cover has separated from the cover, so it cannot be closed. It just needs putting back in and the cover glued back together. This is how it was done at the factory, just needs redoing.
Please do not hesitate to ask me any questions. If you would like for me to call you, please send me your number and a good time for me to call. If you are local and would like to take a look at it in person, we could do that as well.