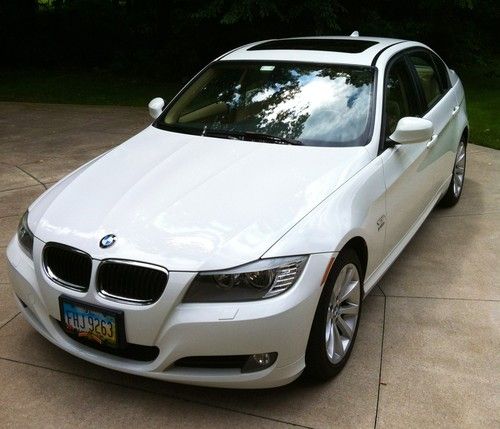 Condition: UsedA vehicle is considered used if it has been registered and issued a title. Used vehicles have had at least one previous owner. The condition of the exterior, interior and engine can vary depending on the vehicle's history. See the seller's listing for full details and description of any imperfections.Seller Notes:"Excellent Condition"

This 2011 BMW 328i xDrive 4-Door with AWD is simply a beautiful car. The exterior is Alpine White and interior is Tan leather.  Kept in the garage during both winter and summer, this car looks and drives great.  One owner, non-smoker and title is in hand.  Fully loaded and in overall EXCELLENT condition!
We purchased it from BMW Cleveland exactly 2 years ago.  My wife needs an SUV to move large items back and forth from work.
It's equipped with PREMIUM PKG (BMW Assist w/Bluetooth, universal remote, power front seats, driver seat memory), VALUE PKG (heated front seats, iPod adapter), STEPTRONIC automatic transmission, heated steering wheel, navigation system and Sirius radio capability.
Enjoy peace of mind with remaining factory warranty and $0 Cost Maintenance until 12/30/2014 or 50,000 miles.

Will global automakers drop local JV partners if China's government says they can?

Chinese economic policies could be in for a big change, as President Xi Jinping pushes the communist country to open its domestic markets even further. That could mean big things for the auto industry, especially when it comes to the country's far-reaching joint-venture system.
According to Chinese law, foreign automakers may only maintain a fifty-fifty partnership with their domestic counterparts. But with Jinping's push for openness leading to potential free-trade deals, that policy could be relaxed (or eradicated all together) in short order. What's an automaker to do?
Well, in BMW's case, stay the course. Automotive News Europe reports that, despite the grumblings about the JV policy changes, the German manufacturer has resigned its agreement with Brilliance through 2028. This is made doubly remarkable by the fact that BMW signed the extension over three years before it was set to expire.

Last month, we went behind the scenes of the filming of BMW's new Driftmob, web video, bringing you one post from the practice sessions, and another from the shoot itself, which took place in an enormous traffic circle in Cape Town, South Africa. Today, BMW has launched the final version of Driftmob, and it's pretty damn cool.
The plot is pretty simple: just like a flashmob, in which people invade a location and perform choreographed dances to music, much to the delight of surprised onlookers, the "driftmob" features a quintet of red M235i coupes that take over a traffic circle and perform choreographed dances - sideways - to the delight of onlookers. The only differences are that, in this case, the onlookers are mostly paid extras (though there were many unwitting passersby that joined the crowd at times) and the only music is a constant squealing of tires-a sweet song if we ever heard one. Then, after about two minutes of tire-smoking shenanigans, the coupes vanish.
As promised, we will have a more detailed, behind the scenes story about the filming of the video, including insights from Rhys Millen, Samuel Hübinette, Dai Yoshihara, Rich Rutherford, and Conrad Grunewald, the five guys who executed these remarkable stunts. Meanwhile, we hope you enjoy the short flick.