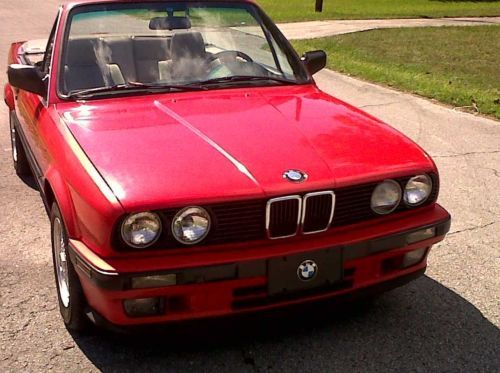 1992 BMW 325is Convertible, great, , car wife drives it 50 miles daily. A/C is ICE COLD even being a convertible. Drives, runs and shifts great! New water pump and Ball joints. All electric windows work perfect, gets 23-25 mpg, Tires are about 70%. Manual top goes down and up easily. Oil changed every 3000 miles and have not needed to add any fluids between changes. We have owned it for a year and a half, wife wanted a new Beetle Convertible so this is now parked as of today. I also took the Pictures today and showed the bad- rear leather seats have separated at the seams on the top, from the sun. The body has a few spots where rust is coming out, also shown in the pics. Also the fuel gauge works when it feels like it, mostly on than off. And last the miles show 68,000 but does not work. Speedo and all other gauges work fine. The dash has No cracks! If any thing else comes to me I will add to the description.

Car also for sale locally, can end at any time if no bids, after first bid I will honor sale on EBay only. Thank you.

BMW Gets Much Closer To The GT Look And Feel It Seeks
The 2014 BMW 3 Series Gran Turismo is being launched to a pretty cynical automotive press brigade. You know it. We know it. Heck, even BMW knows it. We've just returned from driving it on the rather unforgiving and sometimes nasty roads of Sicily, and even before we got behind the wheel, many of our media colleagues were busying themselves doubting the 3 GT's very raison d'être. So, despite the always excellent Sicilian hospitality, the day's atmosphere was kind of fragile.
While the press in attendance seemed determined to nail every product expert to the wall for having been even tangentially associated with the larger 5 Series Gran Turismo, it seemed that BMW decided ahead of time to not introduce such a sensitive discussion topic. That strategy would do little to smooth things over as everyone started digging for dirt on BMW's so far clumsy Gran Turismo franchise.