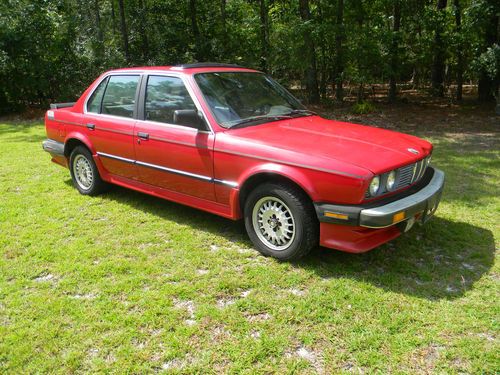 Condition: UsedA vehicle is considered used if it has been registered and issued a title. Used vehicles have had at least one previous owner. The condition of the exterior, interior and engine can vary depending on the vehicle's history. See the seller's listing for full details and description of any imperfections.Seller Notes:"E30 that has a torn driver seat, cracked dash that's been repaired, dent on front of the hood, small dent on driver's side front fender, rust starting on the B pillar and the trunk at the corner edge of the spoiler, antenna snapped, small cracks in bumper, spare tie space has a dent on the bottom but the spare still fits in, there is a known leak in the master cylinder, haven't had to add fluid to it but it's there, AC is inop., rear passenger window is inop. might just be the switch ,more than likely, interior light is inop.,gas gauge is intermittent, trunk weather stripping leaks. Paint isn't perfect some scratches and fading."

New battery, Tires have nearly full tread. This car starts 1st. time all the time and runs strong. radio & speakers are not stock. Ansa exhaust and Kami kit front fairing has a small tear at the corner.

The car was purchased in CA by me, but I moved and it has been driven in SC for the last 7 years.

If you have any questions let me know. SHIPPING AND ALL CHARGES FOR SHIPPING IS THE FULL RESPONSABILITY OF THE WINNING BIDDER!

I have described the defects to the best of my ability and included photos.