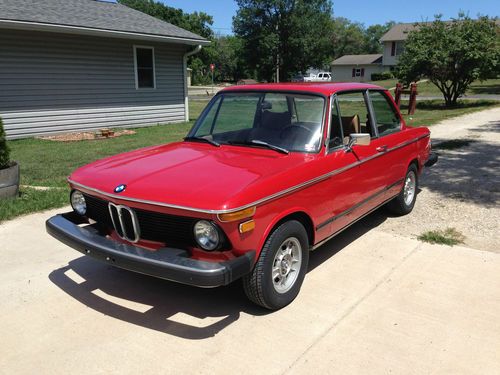 Up for sale is a 1976 BMW 2002 with Verona Red paint and tan interior. Car runs great and engine doesn't leak any oil. Car has 78,255 miles and as far as I know, that is all original. Odometer does work. Car comes equipped with a 4-speed manual transmission. I will do my best to list and any issues that the car has. I bought this car to restore or resto-mod. I have decided to head another direction and this would be a great project for someone who loves these cars. It has all the right ingredients for a well done restoration or resto-mod.

Body is straight, paint is good (with some bubbling around right rear quarter and trunk lid). Paint is original color, but it does look like it has been re sprayed at some point.

Engine runs strong. Numbers matching. Starts first time every time. This car features the Solex 2bb carb. Carb seems like it is tuned for cruising rather than speed. I have not gotten far enough with it to change this.

Transmission shifts good, but will need to some work done in the future as the syncros are starting to wear. In other words, you cant speed shift but it does shift fine for driving.

All lights, switches and indicators work, with the exception of the speedometer (needs a new cable). Even the fasten seatbelt sign lights up when the car starts. Wipers and washer both work at all speeds.

Wheels are good shape and tires have good tread on them.

Trim and bumpers are good.

Interior is in great shape for it's age. No tears in the seats. Dash has two cracks in it (typical for this model). Carpet is in good shape.

The Bad: (Remember this car is 36 years old)

Steering has some play (nothing scary). The steering box will need to be adjusted to take the slop out. I drive it to work with no issues.

Engine burns a little oil, but runs good. This is typical for the original motor.

This car just needs a restoration or a little TLC to make a great daily driver. I just put brand new roundels on it (not the newer, cheaper ones, but the original painted style). Car rides smooth, and doesn't rattle going over bumps. These things are getting harder to come by that aren't in a rusted heap.

I have been looking at all the other models on here, and at other sites for comparison in price and this car is by far the best for the money. This car has great potential. While it is the last year for this model, some quote it as being much better than the 73,74 and 75 models. Most of the exterior panels on this car are in great shape. The interior is in great shape. I could part this car out (which would be crazy to do) and would make much more money than selling it outright. If I don't sell it, I will keep it and restore it myself. It just might have to wait in line :)

2015 BMW X4 configurator is ready to get personal

The 2015 BMW X4 configurator is ready for your special touch. Starting with the 300-horsepower xDrive35i that starts at $48,925 after destination, our special touch aimed at a luxury cruiser and added $9,250 to proceedings for a final tally of $58,175. That got us the Technology, Lighting and Driver Assistance packages, navigation and enhanced USB and smartphone integration. We were tempted to go for the Dynamic Damping Control for just $1,000 and a set of 20-inch M Double Spoke Wheels, but the configurator didn't want to mix the M Sport Line with our Sparkling Brown metallic exterior hue so we skipped it.
We've covered the details on pricing and the breakdown of the order guide elsewhere, so you can always click through for refreshers. Or you can skip all those words and dive straight into trying to build an X4 that makes you say, "Yeah, now I get it."