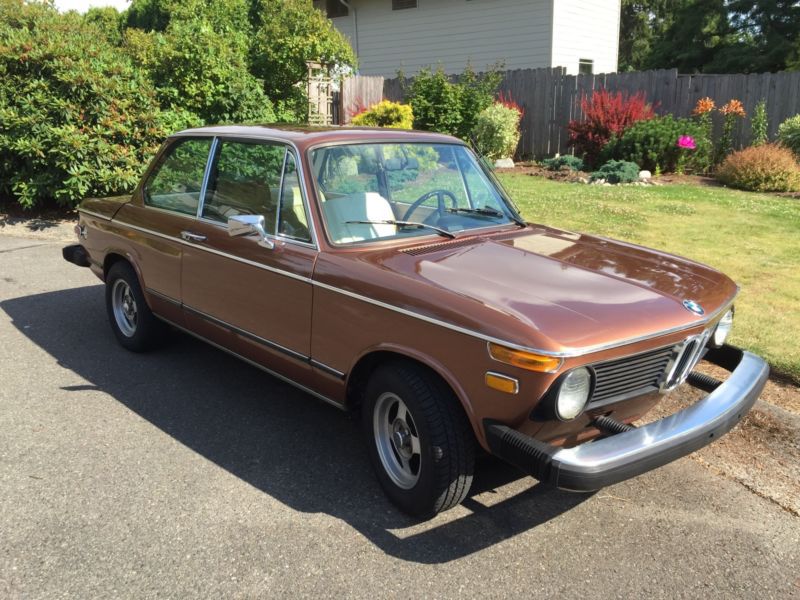 Please message me with questions at: marvinbellido@juno.com .

It has been well cared for and garaged its entire life.
Documents Included: Original German Packing List, Owners Manual, Factory Shop Manual, 1974 car registration. Mechanical •
Original engine. Never pulled, it has had regular oil and filter changes • Transmission: Rebuilt in mid- 80’s,
including clutch. This was typical for the car Interior Clean and odor free. No smoking ever in the car. Original
headliner, dash, console and door panels. Driver seat rebuilt in 1990. It needs to be reupholstered. I have both
seat pads for it from World Upholstery and they go with the sale. Trunk is clean, rust free, all original in color
with original toolkit. Exterior Repainted in 1978 due to the failure of the factory clear coat (BMW recall).
Maintained in original Sienna Braun. In around 1979/80, incurred minor front damage in an accident. The hood was
not damaged; just the front and you can see evidence of this due to the replacement part that has a snorkel. The
windshield is cracked. The wheels are not original to the car, they are 1973 Ronal’s and I have been told
rare/collectible. They were on the car when purchased. In 1990, I restored the paint and front seats. It was
stripped completely, primed and had Siikens two-step paint applied. All chrome border trim, rubber around windows,
trunk, and doors were replaced. Retained original Sienna Braun color. Driving Condition For the last 20 years, it
has been sitting in the garage and driven on a local errand, once or twice a month. It starts right up, always has.
The only breakdown ever was when the gas gauge broke and it ran out of gas. That was replaced. Based on my
observations, I’d drive it only a few miles until it has had a thorough going over. The tires look perfect;
however, they are old. If I were to keep the car, I’d replace the valve seals and rebuild the transmission.
Again, it runs, there is a puff of smoke on start up and then it runs clean. There is a bit of grind when
downshifting from 3rd to 2nd as the synchros are worn. I would also replace the tires. All normal maintence such as
oil changes, belts , water pump, battery has been done. Extras I was planning to restore the car and collected
parts in preparation for it. I haven’t made traction on my project, so it is time to release this car to someone
who will appreciate it and give it the care I have. It would make a great winter project. Extras I am including
are: Hella H-4 halogen headlights, factory BMW 2002 service manual, new ball Joints, brake pads, rubber bushings
for the front suspension. I also have a set of nylon bushings as well, two new Bilstien sport shocks for the front.
Many small parts to such as clips seals, driving lights, rubber gaskets for door handles. Two new door stop brakes.
A Hayne’s 2002 repair manual.