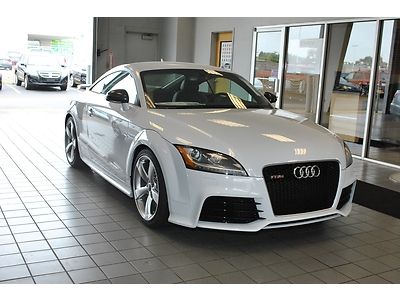 Holy moly. Despite the fact that Audi first released details on its 2013 RS6 Avant back in December, we're still just as smitten with it now as we were a couple months ago. And why wouldn't we be? This stunning piece of forbidden fruit combines two of our favorite things: fast Audis and useful wagons.
The meat and potatoes behind the RS6 Avant is its twin-turbocharged 4.0-liter V8, tuned to crank out 560 horsepower and 516 pound-feet of torque. Mated to an eight-speed automatic transmission, the all-wheel-drive wagon can scoot to 60 miles per hour in just 3.9 seconds, on its way to a top speed of 155 mph. Opting for the Dynamic package ups that v-max to 174 mph, and selecting the Dynamic Plus pack increases that even further to 190 mph.
This RS6 Avant certainly looks the part of an extreme ass-hauler, fitted with the usual RS-spec gaping air intakes, 21-inch wheels, sport exhaust and carbon fiber ceramic brakes. Combine all that goodness with dynamic ride control, an adaptive air suspension and torque-vectoring Quattro all-wheel drive, and we have no doubt that this thing will scare off every other station wagon in the parking lot. (Well, except maybe that Mercedes-Benz E63 AMG. Woof.)