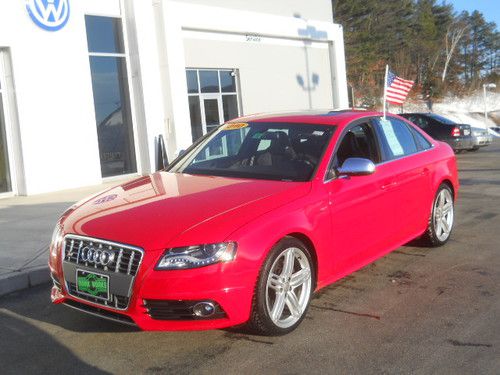 Audi may not be the only automaker out there toying with self-driving automobile technology, but it is arguably the fastest of them. A few years back, it raced unleashed a driverless TTS on the Bonneville Salt Flats, then sent it up Pikes Peak and around Thunderhill. But now it's taking things a step further with the vehicle you see here.
This RS7 Sportback has been fitted with steering, brakes, throttle and transmission hooked up to a computer system that combines GPS, high-frequency radio signals and 3D imaging camera to drive the vehicle autonomously not just in slow-paced, stop-and-go traffic, but around the track at the same pace a professional racing driver would push it: full throttle on the straights, full braking before the corner and 1.1-g of cornering force.
As promised, Audi plans to unleash the self-driving RS7 - which it calls "the sportiest piloted driving car in the world" - at Hockenheim next weekend prior to the DTM season finale, where it is anticipated to pull a 2:10 lap time. The next stage will be to set it lose on the Nürburgring Nordschleife, all 154 turns and 13 miles of it, which ought to pose a heck of a challenge to the engineers from Ingolstadt. In the meantime you can scope it out in the high-res image gallery above and the second teaser video below.

This is the new Audi R18. It looks like the Bond villain of race cars (it has red running lamps), and if Audi's past is any indication, it'll prove difficult to beat in the LMP1 class of the 2014 World Endurance Championship.
The car's full name is the Audi R18 E-Tron Quattro, just like last year's car. Also like last year's car, the new R18 draws its power from a V6 turbodiesel, which powers its rear wheels, and Audi's E-Tron hybrid system, which runs its front axle. Unlike last year's car, though, this R18 has a secondary hybrid system. Audi has fitted the V6 with an electric turbocharger and figured out how to capture waste heat generated when the engine reaches its boost limit. That power can then be stored and fed back into either the turbo or the front axle's hybrid system under acceleration.
There are a number of changes to the body on the new car, forced in large part by series regulation changes. The car is narrower, particularly at the front, but it's also taller. The front end is set off by a new wing, as part of a new WEC regulation. Audi seems quite pleased about this, citing an improvement in front-end downforce and a reduction in cost. Like Formula One, the WEC contenders now have to contend with a ban on the so-called blown diffuser, which forced exhaust gases over the diffuser, creating downforce. That's necessitated some changes from Audi, although as we have no rear shots of the car, we can't tell you what it looks like.