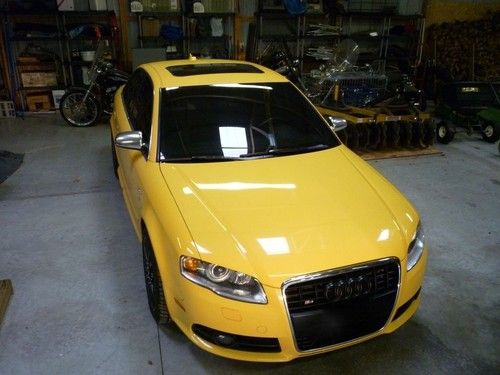 I'm selling my excellent running, smoke-free, non-modified, 2006 rare Imola Yellow Audi S4 with premium package which I've had for 2 years and driven 45,000 (mostly highway miles for work).  The car now has approximately 95,800 miles and has always been serviced at  an Audi dealership since my possession in 2011.

The Subaru WRX, Mitsubishi Lancer Evolution and just about every other all-wheel-drive performance car owes something to the legendary Audi Quattro, a model that was far more successful on the motorsports scene than it was in the showroom. Despite its modest sales, the UrQuattro still looms large in automotive lore, and indeed, in Audi's own sense of self. Considering the brand's semi-regular flirtation with the idea of a reborn Quattro, MotorWeek must have figured it'd be a good idea to revisit the original by digging up this archival review.
While time has the ability to cover up the warts of iconic automobiles, it should be noted that Motor Week host John Davis had more than a few critiques for the all-wheel-drive, turbocharged coupe.
Davis calls the Quattro's slalom handling "a disappointment," citing the overpowered engine and slow steering, and he had some unkind words for the brakes, as well. For our part, we're kind of wowed by the amount of ship-like body motion during testing, yet that sort of bobbing was certainly par for the course back in the early '80s.