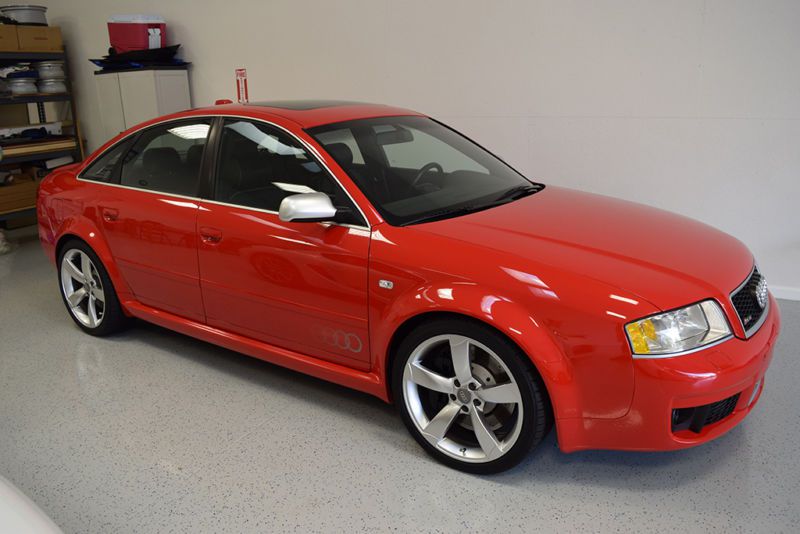 E-Mail Questions at: madalenemccockman@chocoholic.org . 2006 Audi RS6
Presented here is a 2003 Audi RS6 in Misano Pearl Red.
This is a two owner car that I have owned for almost three years.
The car has 61,000 pampered miles. There are no known issues with
the car. Paint and finish are shiny and dent free.
This vehicle has undergone over $10,000 in scheduled service while in my
care and is now good to go for another 100,000 miles.
Recent significant service
Timing belt replacement
The timing belt service was performed at 58,000 mile by an RS certified
Audi dealer in Indianapolis. (Tom Wood Audi).
Expense for timing belt = $3,400
New OEM brake rotors and pads
The rotors and pads were replaced with new OEM parts at 57,000.
Expense for rotors and pads = $3,000
This is a wonderful car with the following standard features.
V8 twin turbo 4.2 liter engine
450 BHP
420 lbs. torque
Handcrafted aluminum body
Bose Symphony audio system with XM
Carbon fiber interior trim
Napa leather seating surfaces
Alcantara headliner
Park assist
Xenon headlamps
Heated front and rear seats
Hand embroidered floor matts from London England (Acquried from an RS6 Forum group buy)
First aid kit
Audi Sport monster mat in the trunk
19” Hartmann Audi Rotor wheels ($2,500)
19”Continential Extreme Contact DWS tires with less than 3,000 miles on them
There are no known issues with this car. I simply have too many cars and feel that this should be appreciated by
someone who knows what this car represents.
This car has been maintained at Tom Wood Audi in Indianiapolis, IN. Inspections encouraged and welcome.
This vehicle is currently being driven and mileage may not match listing exactly.
The car is sold AS-IS and there is not express or implied warranty