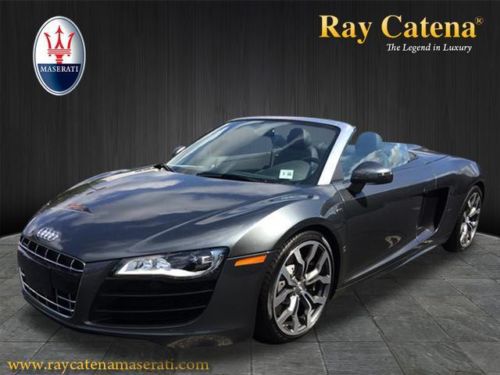 If you had to pick a winner between the latest Audi S3 and the original Audi Sport Quattro, which would it be? Both hot hatches pack around 300 horsepower and all-wheel drive, but they're separated by a good thirty years of development.
To find out, Audi took both to the old rally circuit in San Remo. Behind the wheel of the Ur-Quattro they put none other than The Stig himself - no, not the Top Gear test bot, but Stig Blomqvist, the Swedish former rally driver who drove the Quattro to the World Rally Championship in the mid-80s. In the S3 they put someone named Hermann Müller, who as best we can tell was one of Auto Union's original Silver Arrow drivers - but he died in 1975, so it's probably the guy who writes for the Audi magazine. Regardless, the contest was pretty close, so it's worth checking out in the 2:26 video clip below.

File this one under: "makes sense to us." According to Car and Driver, the slick new gauge cluster found in the 2015 Audi TT will expand to other models in the automaker's lineup. In the near term, expect the tech to make its way into the next R8 supercar (with a special performance display for that model), as well as the upcoming, all-new versions of the A4 sedan and Q7 crossover.
Audi's new customizable gauges first debuted at this year's CES - it uses a 12.3-inch TFT display, and, while similar to the systems found in the Cadillac CTS, XTS and Mercedes-Benz S-Class, this system has the ability to show full-screen, three-dimensional maps. We had a chance to check out the new display in-person at CES, and found it to be impressive, though we're curious to see how distracting it is while driving.
Car and Driver says the system is still undergoing small tweaks before Audi officially launches it in the TT later this year. From there, the display will be standard in the R8, but Audi is unsure about whether or not to offer it as a standalone option in the higher-volume A4 and Q7 models.