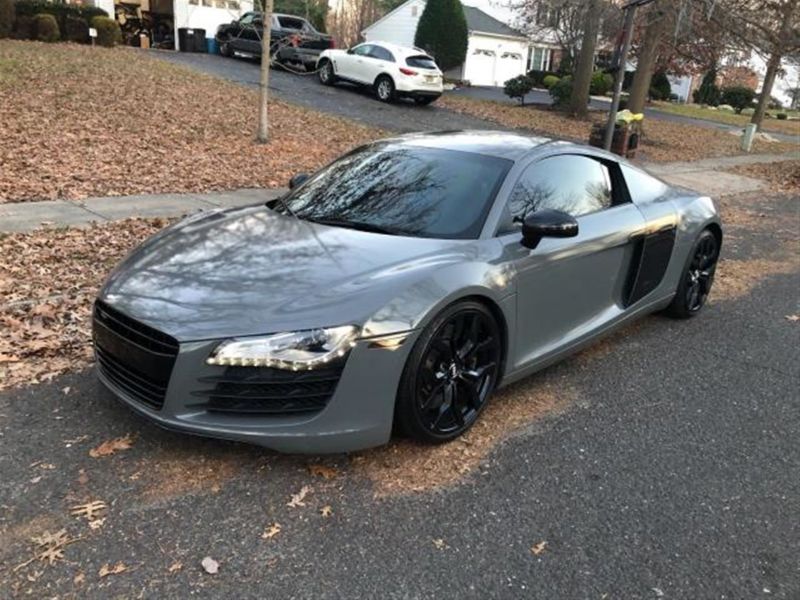 I have more of them than I cancount, sorry its too low, this is already 1 of the lowest priced R8's, Idont need to sell it, I'll keep the car 2008 AUDI R8 V8 4.2 Black ExteriorUnder the Nardo Grey WrapRare Cinnamon Interior Only 37k Miles Non Smoker NoAccidents Excellent Condition No Dings or Dents Fully Loaded Clean Title Whatmore could you ask for in an exotic vehicle? PPI Done at 32k Miles at BellAUDIOil Pan, Sensors, Multiple gaskets and oil changed as a result 2k dollarservice 33k MilesFront Brake Pads were done at 33k MilesHood Resprayed at 33kMilesSide Skirts Re-Sprayed at 36k Miles Stock OEM V10 Wheels are powder coatedblack I waited almost 6 months to find the perfect R8 when I purchased my baby,I can’t even tell you how worth it that it was. This R8 is absolutely amazing,if you have ever driven one you already know how amazing it is to drive. Vehicledoes have minimal road wear for being a 2008 but its in excellent condition,I’m literally insane about all my cars. The front bumper has a few rock chipsbut its not by any means even close to an eye sore, considering the car iscurrently wrapped you can't see it. This vehicle has been babied by me, Ihand wash the car daily and its garaged year round with a car cover includedwith sale. Car turns heads everywhere whether its the

Car and Driver has an update on the design shuffle in Ingolstadt that will ultimately bring more differentiation to Audi products. Last November, Audi design chief Wolfgang Egger spoke of the need to do "something new without breaking from tradition" in Audi design, but talk at the time centered on how the Crosslane Coupe Concept would influence the new looks of the brand's Q cars. The most recent moves appear focused on passenger cars, with designers from Volkswagen Group kin like Bentley and Seat moving to Audi, and outsiders from Alfa Romeo moving in.
While Egger decreed the end of "scalable design" to CD, last November's report said there would be more technology and "greater visual cohesion" between interior and exterior design. We still have no idea what all this means nor when we'll see visible changes in production, but at least we know there's something being done behind the scenes.

For the last few years, Audi has been publicly toying with building a successor to its Ur-Quattro, a model still glowing in a gritty patina of motorsports glory decades after it left the scene. If anything, the rally car's halo has burned brighter as Audi has matured into a world luxury superpower. Since 2010, the German automaker has shown two different concept cars that attempted to re-bottle the legend's lightning, and it's still trying to figure out whether to market a production model. Despite that conundrum (and not to take anything away from the seminal Ur-Quattro), it's easy to argue that there are two other cars much more important to Audi's rise from its '80s ashes: the original TT and the B5-generation A4 and its high-performance variants.
The TT thrust Audi into the vanguard of automotive styling while firmly establishing the Volkswagen Group as masters of platform development (the same basic architecture and powertrain guts were employed in a dizzying array of models, from the Golf, Jetta and New Beetle to a number of Škoda products). This unprecedented, flexible building-block approach to new model development has since become the standard of the industry.
In the case of its B5 cars, the A4, S4 and RS4 put Audi back on the radar of rival German automakers, and more importantly, they grew the Four Rings' sales by leaps and bounds while reminding the world that all-wheel drive needn't only benefit hardcore performance cars and utility vehicles. Fast-forward to today, and the A4 has established itself as the bedrock of Audi's lineup, but it's also grown over its four generations to become substantially larger, heavier and costlier than the model that debuted back in 1996 America. That's created a vacuum at the bottom of the range that the company has inadequately addressed - until now.