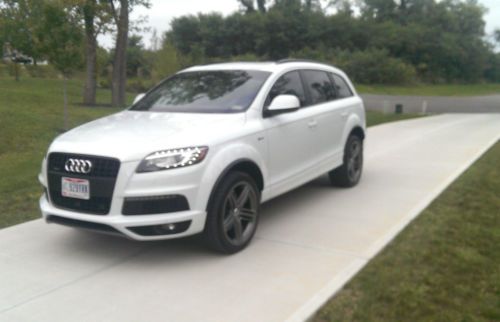 Next Audi Q7 to debut with electric turbocharger?

For years, the concept of an electric turbocharger was essentially a joke sold on eBay to boost power in your slammed Civic, but in the last five years it has moved from an idea on a piece of paper to a feasible reality. Audi has already toyed with a showcase of the cutting-edge tech in road cars with the RS5 TDI concept. Now, reports suggest an electric turbo may make it to the streets as soon as next year in the next-gen Q7 (spy shot pictured above).
"I can confirm we are working on the development of the e-boost definitely," said Ulrich Weiss, Audi's diesel engine boss, to Australia-based Drive. He didn't give an exact timeframe but hinted at sometime next year, possibly in the Q7. He also suggested the chance of an RS-branded diesel model in the vein of the RS5 TDI concept on the horizon, as well.
This tech isn't entirely new for the folks in Ingolstadt. Audi's R18 endurance racer already uses such a system to capture waste heat from the engine, converting it to electric power to further power the hybrid car. The RS5 TDI concept employs a similar idea with a 3.0-liter, twin-turbocharged V6 with an electric supercharger to make up for the turbo lag. It's able to pump out 385 horsepower and 553 pound-feet of torque and allegedly sprint to 62 miles per hour in four seconds.