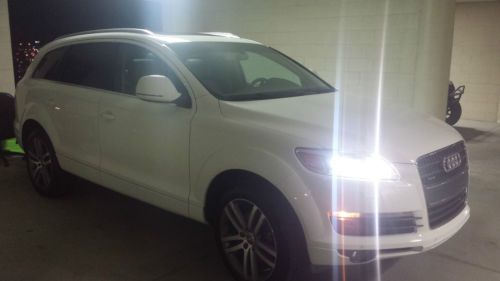 Luxury car buyers are a demanding bunch. They've got this crazy notion that just because they're spending the better part of a hundred grand on a top-tier luxury sedan, they should get the very best and the cutting edge of what the industry has to offer. That has tended to come down to the S-Class even when it had grown long in the tooth, and now that Mercedes-Benz has rolled out an all-new version, the competition is falling all over itself to release updates to keep their flagship sedans in the running. Jaguar did that just yesterday with its XJ sedan, and now Audi has revealed the latest revisions to its A8 range.
Set to debut at the Frankfurt show in just a few weeks from now, the latest A8 (and its performance version, the S8) benefits from a series of stylistic, powertrain, and technology upgrades. Among the most prominent, of all things, are the new Matrix LED headlights that can automatically lower the high-beams for oncoming vehicles, with integrated turn signals that light up to point in the direction the driver's about to turn. But that's hardly the end of the story.
Audi has apparently reduced the output on the 3.0-liter supercharged V6 to from 328 horsepower to 310 but raised the 4.0-liter twin-turbo V8 from 414 hp to 435, which now offers a 0-60 run of just 4.5 seconds. That's just three tenths behind the S8, which remains unchanged at 513 hp, as does the 493-hp 6.3-liter W12. The 3.0-liter TDI is up from 247 hp to 258, the 4.2-liter TDI grows from 345 hp to at 385 (with a massive 627 pound-feet of torque to boot) and the hybrid that offers a combined 245 hp and 354 lb-ft. That makes for one massive array of engines globally, although only some of them will be offered Stateside. Each is mated to an eight-speed automatic transmission and Quattro all-wheel drive, but thanks to the A8's lightweight construction, it's lighter than any other all-wheel-drive model in its class.