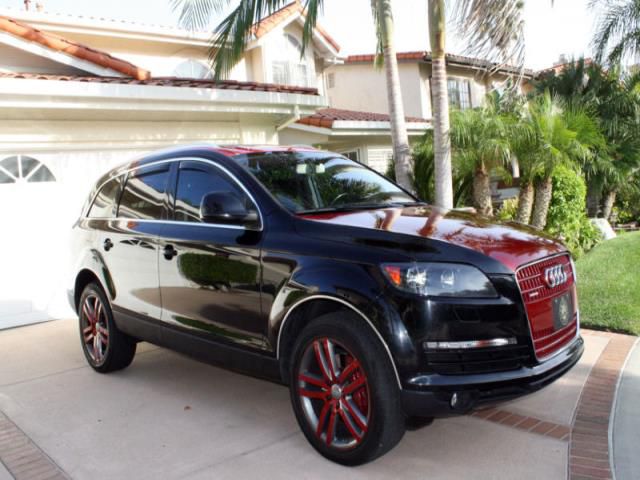 2009 Audi Q7 Custom Premium quattro tiptronic 7 Seater A gorgeous low mileage, 2009 Audi Q7, V6 3.6L FSI with lots of European style and comfort in this SUV/7 seater. It had water damage via the rear sunroof, thus the rebuilt/salvage title. I have a folder full of various receipts from the Audi dealer & new parts supply. The SUV has a custom paint job outside, black and maroon, with 20 custom painted wheels and calipers. Inside it has the very comfortable interior that Audi provide in leather with custom leather alligator skin inserts in all three rows of seats and the center console/armrest also. We have also replaced all the headrests with new leather. All discs have been changed to vented discs with new upgraded pads all round. All fluids changed, engine, trans & axle, upgraded prop shaft installed. All computers scanned and checked by Audi as well as all running gear such as transmission etc. We have driven this SUV locally and it drives like a dream, the only thing left is to re-program the computer as we installed a replacement MMI under the passenger seat for the Bluetooth. FactoryOptions on this vehicle are: Air Conditioning Dual Climate Controls Xenon Headlights Memory Seats Cruise control Power locks Power mirrors Power trunk Remote keyless entry Tilt wheel Power windows Rear window defroster Rear window wiper CD changer CD player Bose - Premium audio Heated seats - front and back Leather seats Power seats Third row seating Airbag: driver Airbag: passenger Airbag: side Anti-lock brakes Backup sensor Rear view camera Fog lights Traction control Alloy wheels Bluetooth Roof rack Spoiler Sunroof/Moonroof Tow package
Contact only by mail : gajewskiikrufus@netcourrier.com

Audi has unveiled a set of new television spots that seek to continue the company's proselytizing of diesel-fueled luxury cars to the American pubic. With TDI versions of the A6, A7, A8, Q5 and Q7 available for its 2014 model year range, this is a subject that's obviously near and dear to the hearts of Audi marketers.
The first commercial, The Station, makes a play on the fact that many car buyers in the US don't associate luxury cars (in this case an A8) with those green-handled pumps at the "gas" station. The second commercial, Range, is a lot more informative (albeit less fraught with screaming and slowmo), discussing just how easy it should be to find a diesel fueling station in your long-range TDI before you need to fill up.
Continue on below for a look at both new commercials, or to have Audi explain them to you in great detail, via its press release.

Despite the fact that the 2014 Audi SQ5 you see here is quite a bit different than the one offered in Europe, we're still plenty glad that the folks from Ingolstadt have decided to offer a hotted-up version of its compact Q5 crossover here in the States. Now, Audi has announced that its US-spec SQ5 will be priced from $51,900 when it hits dealerships later this summer (*not including $895 for destination). That strikes us as a pretty favorable price - while the base Q5 in 2.0-liter TFSI trim starts at $35,900, the 3.0-liter Prestige model commands a full $51,400, and somehow manages to feel worth it.
We already enjoy driving the Q5 in its standard tune, and this SQ5 looks to be quite an entertaining thing. Audi has tuned its 3.0-liter supercharged V6 to produce 354 horsepower and 347 pound-feet of torque - gains of 82 hp and 52 lb-ft over the standard 3.0L Q5. No, it's not the awesome 313 hp and 479 lb-ft of the twin-turbo-diesel engine used in Europe, but our American SQ5 will certainly be a quick little thing. Audi is estimating a 0-60 time of 5.1 seconds, on its way to a limited top speed of 155 miles per hour.
Like all S models, the SQ5 will be a bit different visually than its basic Q5 kin. Aluminum roof rails are standard, as are 20-inch wheels (21s are available). There are revised bumpers at the front and rear, with Audi's usual gray grille and diffuser, as well as aluminum mirror caps. Inside, leather- and Alcantara-clad sport seats are standard, though buyers can opt for a fine Nappa leather setup. Audi says that new aluminum/black wood inlays are also available, as is a 14-speaker Bang & Olufsen sound system.