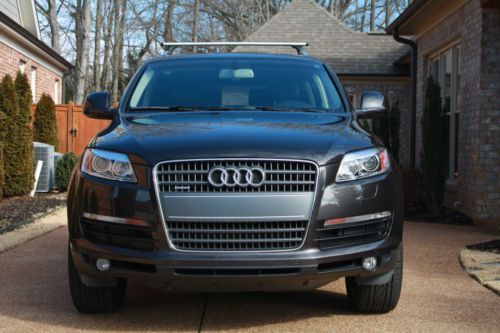 The brands in the Volkswagen Group have shown that they can develop some of the world's best diesel engines for passenger cars. At the Vienna Motor Symposium taking place May 8 and 9, Audi has an updated one to add to its lineup. It's launching a new version of the 3.0 TDI V6 with better efficiency and more power than the version currently in the US.
The new diesel will be offered in two tunes: 215 horsepower or 268 hp. However, Audi isn't giving away all of the new engine's secrets just yet. It says "depending on model" the mill makes as much as 442.5 pound-feet of torque and gets as much as 13 percent better fuel economy. That likely means the more powerful version gets the twist, and the other one has the better consumption, but we'll have to see.
To compare, the current 3.0 TDI offered in the US produces 240 hp and 428 lb-ft of torque. In the A6, it's rated at 24 miles per gallon city, 38 mpg highway and 29 mpg combined, according to the EPA.

Is the Audi R8 E-Tron project back on again?

If you ask Audi about its R8 E-Tron prototype, the all-electric two-seater that was first shown at the 2009 Frankfurt Motor Show, the automaker will tell you that its development program is on hold. Yet, as we reported in January, limited production of the combustion-free coupe may be moving forward... information still officially unconfirmed by the automaker.
New images of the electrified R8 undergoing winter testing in Europe have emerged (above and in our gallery), and the car has been spotted running in Spain as well. Both sightings support reports that the E-Tron, with its 150-mile battery range and 8:09 Nürburgring time, may be back in business. Does the program have a green light, or is Audi merely trying to take some of the thunder from the BMW i8?
Whatever the case, if the R8 E-Tron does eventually make it into showrooms - and we are now led to believe it will - expect production volume to be very low. Assuming it doesn't get shelved again, of course.