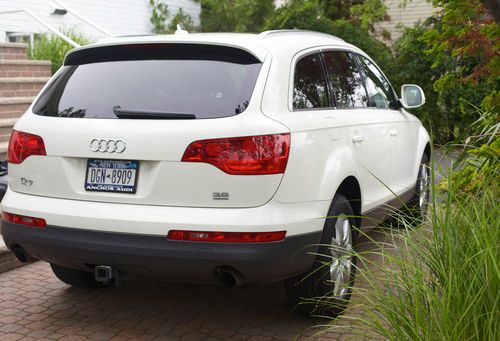 Loic Duval, driver of the #1 Audi R18 E-tron Quattro, suffered a massive crash today during free practice for the 24 Hours of Le Mans. Duval's car reportedly went off track backwards at high speed near the Porsche Curves and flew into the retaining fence. There is no video of the actual crash at the moment, but a video of the aftermath (viewable below) shows significant damage to the Audi and to the fence. The wall nearby the car appears unaffected.
Thankfully, it occurred quite close to a marshal's stand, and they were present almost immediately after the incident. Both the official press release from the 24 Hours of Le Mans and a tweet from Audi Sport (below) indicated that Duval was conscious after the crash, and he was taken by ambulance to the medical center and then to the hospital. The press release says: "His condition is encouraging." However, any injuries he might have sustained are unknown at this time. After the crash, the course was red flagged, and practice resumed about 50 minutes later.
Duval is alert. He will be transported from the Medical Center to the hospital for further examinations #R18 #LM24 @FIAWEC @24hoursoflemans

Audi, in case you haven't noticed, is quite committed to diesel technology. It champions oil burners in both the racing world and to consumers, offering American customers a total of five diesel-powered models, which is more than any brand in the US market save for its parent company, Volkswagen. In a bid to prove that diesels aren't some passing trend and are actually gaining momentum in the US, Audi commissioned Harris Interactive to conduct a poll of 1,600 American drivers, to see how they felt about diesel power. The resulting statistics are rather surprising.
57 percent of the 1,629 drivers surveyed think the government has unfairly favored hybrids and electrics over diesel power
65 percent of drivers support laws being passed to make diesel more accessible, while 66 percent support tax incentives for diesel-powered vehicles