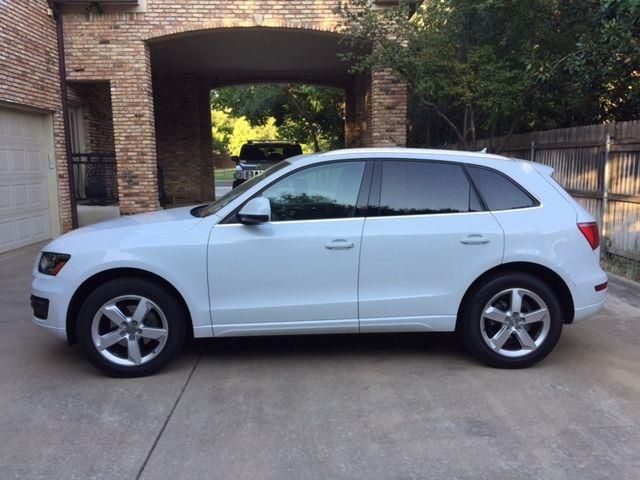 2012 Audi Q5 2.0T Quattro Tiptroninc was used friends daughter for college use only. The car is very clean on the inside.

Making its world debut at the New York Auto Show, and commanding a $40,250 premium over the base RS7, is Audi's new 2015 RS7 Dynamic Edition that arrives with an MSRP of $146,045 (including destination and delivery). The range-topping hatchback is designed to showcase Audi's exclusive program, which allows customers to choose choose from the automaker's long list of options and then take the customization one step further with bespoke paintwork, upholstery, bodywork and wheels.
The interior features Black Valcona leather seats with Crimson Red honeycomb stitching, and matching Crimson Red seat belts. The contrasting color is carried through to the stitching on the dashboard, center armrest, door panels, shift boot and center console. Carbon fiber inlays provide additional contrast. The exterior is offering in four colors (Ibis White, Suzuka Gray metallic, Daytona Gray pearl and Phantom Black pearl), with each arriving with performance-oriented DRC suspension (with three-stage adjustable dampers), 21-inch Gloss Black wheels, Tornado Red painted brake calipers and sport exhaust. A carbon fiber front splitter, rear diffuser and carbon fiber engine cover complete the package.
Like the standard RS7, the Dynamic Edition arrives with a twin-turbocharged 4.0-liter V8 rated at 560 horsepower and 516 pound-feet of torque. With an eight-speed automatic transmission, running through Audi's Quattro permanent all-wheel drive and a sport differential, the four-passenger vehicle will crack the 60 mph acceleration benchmark in a reported 3.7 seconds - and, thanks to cylinder-on-demand technology, it avoids a gas-guzzler tax. The RS7 Dynamic Edition arrives at dealerships in early summer.