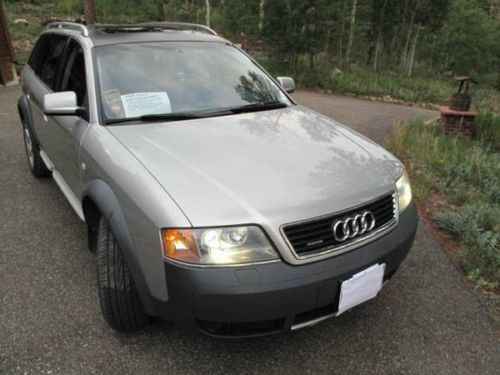 Condition: UsedA vehicle is considered used if it has been registered and issued a title. Used vehicles have had at least one previous owner. The condition of the exterior, interior and engine can vary depending on the vehicle's history. See the seller's listing for full details and description of any imperfections.Seller Notes:"It's a used car, so if you want perfection, head to a showroom and get something brand new. Having said that, the car looks very good. This is a listing of everything I can think of that a buyer might notice, not an indication of problems. Small dent in right rear quarter panel by wheel well (Won't show on pictures, about 2 inches, 1/4 inch deep). 2 wheels slightly scuffed. Front windscreen light pitting. A few miscellaneous scratches here and there. AFAIK, everything works except the cruise control which is iffy, believe it's just the stalk switch. New front suspension tie rods and links. Front suspension height-adjustable bags changed about 10,000 miles ago. New timing belt, new water pump and miscellaneous engine work done 20,000 miles ago. Changed circumstances, getting something smaller."

According to Car and Driver, citing a report in Germany's Der Spiegel magazine, Audi has fired Wolfgang Dürheimer, the brand's head of research and development.
Dürheimer had originally signed on as Audi's R&D boss in September 2012. Prior to that, he had served as the head for both Bentley and Bugatti, and was formerly the development chief at Porsche (where he is credited with helping get the original Cayenne into production, a move that ushered a new era of profitability for the company). Dürheimer moved to Audi following a management shakeup within the Volkswagen Group in mid-2012.
During his time at Bentley, Dürheimer spearheaded the brand's efforts to launch an SUV. But at Audi, he reportedly quickly put a stop to costly projects such as the R8 E-Tron and the rotary range-extender engine for the A1 E-Tron. Furthermore, Car and Driver reports that Dürheimer shuffled the reporting structure within the brand's design department, and that VW Group CEO Martin Winterkorn had apparently disagreed with him several times on the styling direction for the brand.

Audi is well underway with testing for all of the refreshed versions of its A6-based sedan. We've already shown you shots of the Euro-spec A6 Allroad (which will wear some of its styling with our US-spec A6 sedan), and now we have some shots of a car that will actually arrive in the United States - the S6.
Like the Allroad, this will be quite a modest refresh, with tweaks to the headlights and taillights, as well as some slightly revised front and rear fascias. The headlights should get a new LED DRL pattern, although we doubt the changes will be much more drastic than that.
As with the Allroad, it seems likely that Audi will make a few very small changes to the interior, while the MMI infotainment system should also see an update. Changes under the hood, though, are more difficult to guess. That said, minor changes could be in store, but don't expect a dramatic increase in power or performance.

Audi also calling in A8, S8 over sunroof issue

The S6 and S7 (apparently prone to potential fuel leaks) aren't the only Audis being recalled currently, as a separate recall notice has been issued for its flagship A8 luxury sedan and its high-performance counterpart, the S8.
The problem apparently revolves around the glass sunroof, which is fitted as standard and which is reportedly prone to break. The National Highway Traffic Safety Administration determined that not only could the falling shards themselves end up injuring the vehicle's occupants, but could also distract the driver enough to cause a crash. As a result, Audi's American wing is bringing in all 2013 and 2014 model year A8s and S8s - 1,120 units in all - to have their glass sunroofs replaced free of charge.