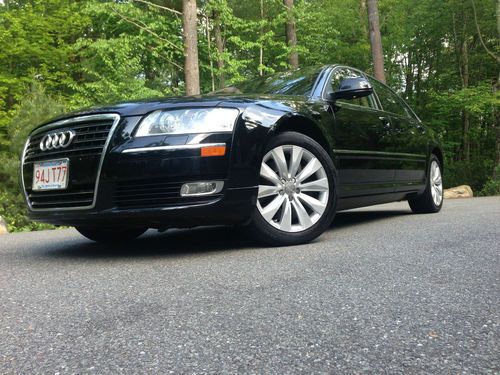 This is my father's vehicle. He is a 62 year old Doctor who lightly drives it to and from work and other events. The interior is tight, perfect, and still smells new! The Exterior similarly is in incredible condition. When my father purchased the vehicle he bought an extended warranty which will have you fully covered for everything (electrical, mechanical, etc.) for about another 20k miles! This car is loaded with every option, you can plug in your ipod, 6-disc cd changer, dvd player, navigation, you name it.. it has it!  It has Audi DVD players on the rear head rests with wireless headphones that are still packed up as they were never even used! All maintenance complete, and new tires shown in pic (also has a full size spare!)Truly incredible condition, and it is worry free due to the comprehensive warranty that comes with it! Please feel free to contact me with any questions!

I officially gave up after 758 miles. The 15 or so miles leading up to this decision were spent in the right lane of Southern California's I-8 freeway, hazard lights blinking, climbing uphill at just over 40 miles per hour. After two days of sweating to the oldies (okay, a mix of SiriusXM Classic Rewind and First Wave), I had covered those 758 miles in a 2015 Audi A3 TDI on one tank of diesel fuel. And when I say sweating, I mean it quite literally. In order to maximize fuel efficiency, my co-driver and I kept the air conditioning off, even when the direct sunlight in the California desert had outside temperatures hovering around 90 degrees. I had been doing this hypermiling exercise for two days, the car was getting stinky, and I was ready to hear the sweet "thhhhhhhwack" of satisfaction that would finally come from peeling my sweat-soaked self off the A3's leather seat. Sexy, I know.
Audi had challenged me to drive 834 miles from Albuquerque, NM to San Diego, CA, on just one 13.2-gallon tank of diesel fuel. If you believe the EPA's highway fuel economy rating of 43 miles per gallon, this means I should have sputtered to a stop after 568 miles. But I went a grand total of 758 - that's 59.4 mpg - and I could have kept going. In fact, two teams made it the full 834 miles on their one allotted tank of fuel. That's over 63 mpg. That's twenty miles per gallon better than EPA estimates.
The TDI Challenge took me through three states over the course of two days, and the 834-mile journey wasn't just a simple highway cruise. I negotiated uphill climbs, long series of involving switchbacks through the mountains and elevations that ranged from 220 feet below sea level to nearly 8,000 feet above. I learned that super-crazy-efficient driving like this an incredibly challenging game that takes serious skill. But I also learned that if you're going to attempt to stomp all over the EPA's numbers, the Audi A3 TDI is one heck of a car for the journey.