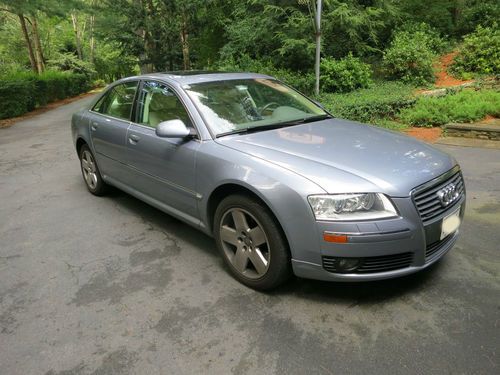 Condition: UsedA vehicle is considered used if it has been registered and issued a title. Used vehicles have had at least one previous owner. The condition of the exterior, interior and engine can vary depending on the vehicle's history. See the seller's listing for full details and description of any imperfections.Seller Notes:"There are 3 minor scratches on the rear bumper - see pictures and a minor defect on the front bumper"

This is a one owner, woman driven car, that was special ordered. The car has:

1. The Premium Package (Electric side and rear Sunshade, Advanced key, power trunk close, heated front and rear seats, Audi parking system, power door close assist)
2. Sirius Satellite Radio
3. Heated Steering Wheel
4, Ski sack
and all the standard equipment for 2006 such as: adaptive air suspension, adaptive headlights, Bluetooth cell phone integration etc.
The last oil change/service was at 71500 miles,
* 55k Major service was in June 2010
*the air suspension compressor was replaced one year ago at 68.9k miles,
*a new battery was installed in June 2013,
*all 4 TPMS were replaced in 2012 and
*new  tires (Michelin Pilot Sport) were installed in Oct 2010 18k miles ago; 5 mm left according to Audi inspection 1K miles ago..
I have all the service records. Car was always garaged, dealer maintained with frequent oil changes and driven mostly on highways.
We have both sets of keys as well as all the manuals and brochures for the car. This is a great car.
One of the pics shows the last dealer inspection from 06/18/2013, 1000 miles ago.
The cars is sold in AS IS CONDITION without any WARRANTY.  A $1000 deposit is required within 24h and full payment within 3 days after auction closes.

Ignore the naysayers who say the Audi R8 is too refined to be a proper supercar, or that it has begun to show its age - after a few tweaks for the 2014 model year, the automaker's flagship remains one of my favorite exotics.
Audi has treated all of its R8 models to a host of enhancements for the 2014 model year that include new LED headlights and tail lamps, larger steering wheel-mounted shift paddles, new exhaust finishes, updated alloy wheel designs and fresh exterior colors. However, the most significant news is the arrival of a proper seven-speed S-Tronic dual-clutch automatic transmission (it replaces the six-speed R-Tronic). The rapid-fire gearbox shaves a coupe tenths off the 0-60 sprint and improves fuel economy for both the eight- and ten-cylinder models (thankfully, a traditional six-speed manual is still on the order form).
I recently spent time with the new-for-2014 V10 Plus model, which is only available in a coupe body style. Compared to the standard V10 models, the Plus sheds upwards of 130 pounds thanks to lightweight manual seats (not fitted to my test car), carbon-ceramic brakes, reduced sound bay insulation, a smaller fuel tank and an assortment of carbon-fiber pieces (including side blades, front splitter, rear diffuser and spoiler). But that's not all, as the V10 Plus also receives a bump in output that pushes its ten-cylinder to an even 550 horsepower.