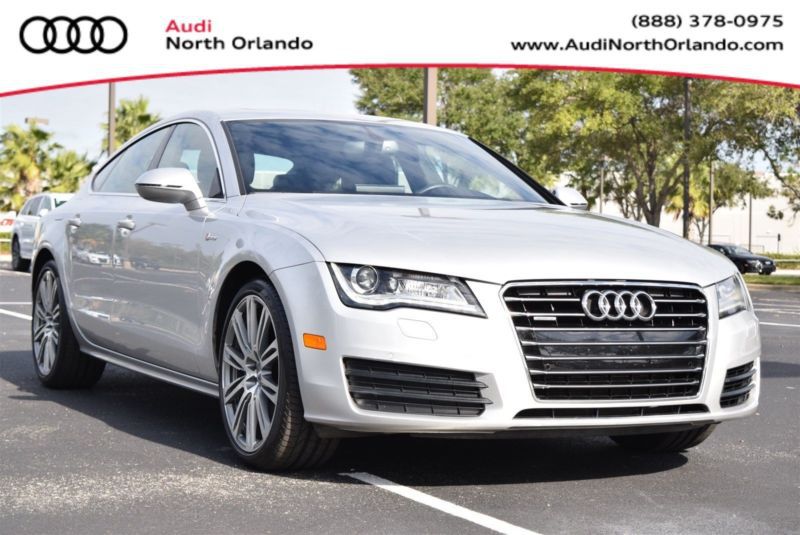 Send me an email at: rhettrttaha@crewefans.com .

Audi North Orlando
#1 Audi Dealer in Central Florida
is proud to present............
2012 Audi A7 3.0T
Vin# WAUYGAFC0CN107480
miles 52,510
Here is your chance to own a very Nice Audi A7
Equipped with a 3.0 liter Supercharged V6 310hp/325 lb-ft Torque
and 8 speed Tiptronic transmission
Ice Silver Metallic/ Black interior
This Audi A7 came with the following options;
Ice Silver Metallic paint $475
Premium Plus $3,620
Audi navigation plus with MMI touch, Audi Connect,
Front & Rear Parking Sensors, HD radio, Auto-Dimming,
manual folding, heated exterior mirrors,7" color driver information system
20"Wheels with Summer Performance tires
Audi side Assist
Take advantage of this Certified Pre-Owned that comes with
I with 2 keys,owners manual and original window sticker.
There are no stories behind this car, no smells, No Accidents, No paintwork

Audi Prologue concept goes for A9, we give it a ten

If you've been waiting for Audi to roll out a new design language, you need wait no longer as Ingolstadt is displaying just that at the Los Angeles Auto Show this year with the Prologue concept you see here.
Penned by Audi's new design chief Marc Lichte, the Prologue is earmarked to introduce a shift (if not quite a complete change) in design direction for the German automaker. The trapezoidal grille sits wider and lower than on existing models, with the wedge-shaped laser headlights positioned higher above new air intakes with blade elements. The profile rests balanced across its wheelbase to visually emphasize the all-wheel drive that is part of Audi's DNA, with flared arches inspired by the legendary Ur-Quattro. The rear section is inspired by yachts, angled forward to suggest motion, with a narrow strip of LED taillights, full-width diffuser element and twin trapezoidal exhaust tips.
Inside it's all light and surgically clean, with a horizontal dashboard integrating four touchscreen displays running its full width. The system even allows the passenger to select the route for the navigation system and swipe it on over to the driver's display. The headrests on the rear seats and the "sound spoiler" on the rear shelf deploy only when needed, unobstructing the rear view when not.

Next Audi R8 caught on the 'Ring

Now that we're kinda-sorta-maybe-slowly thawing out from this horrible winter, automakers are moving away from the harsh extremes of winter testing and taking their new wares for laps around the infamous Nürburgring. What better way to kick off the sports car testing season than some fresh shots of the next-generation Audi R8 supercar?
Despite the slick coupe's shape not changing too much, details under that camouflage reveal styling elements that are more squared off and angular - similar to what Audi has done with its 2015 TT coupe. Don't be fooled by those square taillamp holes in the camo out back, either - look closely and you'll see a stylish LED lamp design.
Expect some 100 to 200 pounds to be shaved off the next R8's curb weight.