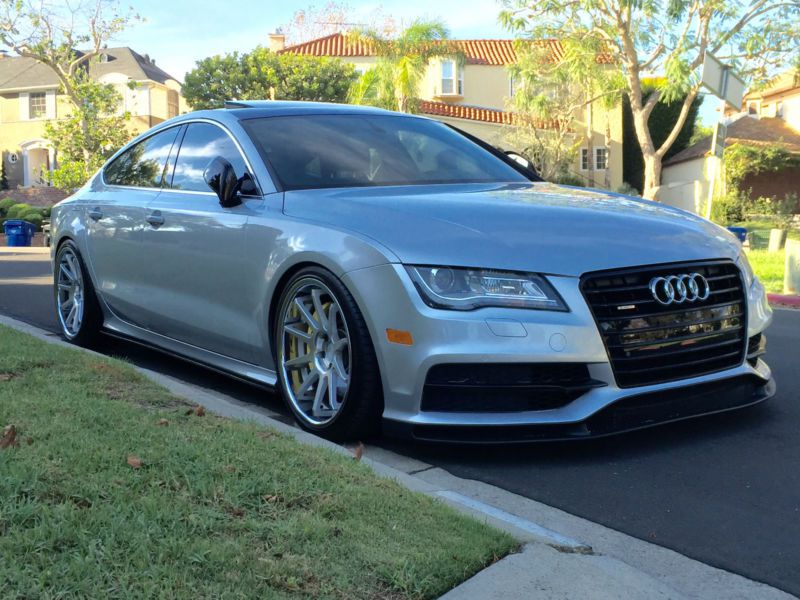 I purchased this car in 2012. I bought this A7 for demo and car show purposes. This vehicle has been featured at
SEMA twice(largest car show in the world). If you google evoklass Audi A7, you can see dozens of pictures that have
spread virally online. All maintenance and factory recalls performed. Just installed a new set of Hankook tires.
The vehicle is still under its factory original 4 years/50,000 mile warranty. The modifications performed include
the following:
- tinted windows
- glossy black vinyl roof
- H&R lowering springs
- 20" Concept One Wheels
- Brand new Hankook tires
- evoklass body kit which includes
- rear carbon fiber replacement rear wing
- carbon fiber side skirts
- carbon fiber rear diffuser with glossy black exhaust tips and third brake lamp
- front lip spoiler
It goes without saying that this car is a stunner! It turns heads everywhere it is seen.
Model Overview
For 2012, the Audi A7 is only offered in 3.0 quattro form, which includes a 310-horsepower, 3.0L direct-injection
supercharged V6. With a belt-driven supercharger, it sounds like a well-mannered luxury car most of the time, yet
it also produces a V8-like 325 pound-feet of torque.An 8-speed automatic transmission includes Tiptronic manual
controls for those who'd rather command the shifts themselves, and most of the time it responds well, with prompt,
decisive downshifts in fast driving or smooth, well-masked upshifts in gentle driving. Fuel economy ratings are a
bit better than a V8, at 18 mpg city, 28 highway, while the A7 can get to 60 mph in a quick 5.4 seconds, according
to Audi. All A7 models include the latest, performance, oriented version of Audi's quattro all-wheel drive system,
which during normal driving sends about 60 percent of engine torque to the rear wheels but can send more to
whichever wheels can best use the traction. The system even aids stable handling near the limit on curvy roads by
employing the stability control system and judiciously applying the brakes to one or more wheels. It's enjoyable to
hustle down curvy roads, thanks to a variable-boost electromechanical steering system plus a 5-link front
suspension and trapezoidal-link rear suspension that rides somewhat firmly but is just compliant enough for comfort
on choppy urban streets.To make it all a little more useful and enjoyable there's a system called Audi drive
select, which includes four modes: comfort, auto, dynamic and individual, to cater the feel of the steering, shift
points for the transmission and the way the throttle responds, all to meet certain driving styles.The beautiful
cabin is one of the most stylish on the market, but it's no fashion victim. You get firm, supportive seats and a
back seat that's usable even by taller adults, thanks to a carved out area of the headliner allowing just a couple
inches of extra head space. The rear hatch also allows more space than a trunk would--24.5 cubic feet even with the
rear seats up in place. Those back seats do fold down when needed, and there's a large trunk pass-through for skis
and such.Inside, the A7 is a luxury car in every detail. There are two different leather upholsteries (Milano or
Valcona) offered, both soft and rich. Ash wood veneers are included, or dark brown walnut and brushed aluminum
trims are optional, all with chromed bezels and aluminum-like accents--providing some combinations that look
stunning either in light or dark themes.The A7 also includes 3D Google Earth mapping for the navigation system,
which allows you to see topography and terrain in addition to the tops of trees and rooftops of buildings. Other
standout navigation features include Google Voice Local Search that will listen to keywords and return potential
local destinations. Audi Connect allows the A7 to become a wireless hot spot that's capable of simultaneously
hooking up to eight WiFi-enabled devices to the Internet. Wrapping it all together is a new version of Audi's
touch-screen-based MMI (Multi-Media Interface) that includes a rotary button/knob as well as hot buttons for some
commonly accessed functions. There's also one Audi exclusive: a scratch pad (called MMI touch) that allows the user
to draw out letters to quickly enter navigation destinations or other inputs. Among the top options offered on the
A7 are a 14-speaker Bose sound system or, for audiophiles who want the best, a Bang & Olufsen Advanced Sound system
with 15 speakers and 1,300 watts of amplifier power.

It was just a couple of weeks ago that Audi revealed a few mild updates to its A7. It even ported those changes over to the warmed-up S7 performance version. All that was missing was the full-steam RS7, and that's precisely what we have here.
Now before you get all excited, note that the new RS7 packs the same powertrain as the model it succeeds, but then again, the existing RS7 hardly lacked in the power department. The 4.0-liter twin-turbo V8 still churns out 560 horsepower and 516 pound-feet of torque, transmitted to all four wheels through an eight-speed automatic. Revealed initially for the European market (with US details presumably to follow), the 0-62 kilometers per hour time is quoted at 3.9 seconds, so the 0-60 mph time ought to match the 3.7 seconds of the preceding model.
What has changed are the subtle tweaks Audi has made to the exterior and equipment upgrades inside. The grille now features has a horizontal section at the bottom with the Quattro logo emblazoned across like all other recently revised RS models, flanked by new headlights (Matrix LED units for the European market). Inside the cabin the air-con vents and shift paddles have been reshaped, and the new MMI system ports over from the new A7 and S7 with 4G LTE connectivity and a Bang & Olufsen sound system.