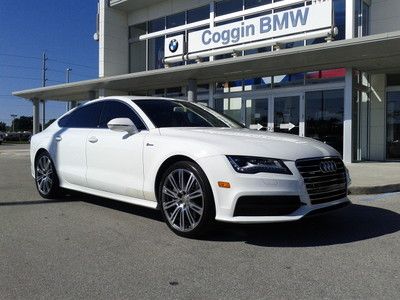 Eric Kim just graduated from the from the Art Center College of Design in Pasadena, CA, at the end of the spring 2014 semester, and for his senior thesis project he came up with this futuristic Audi endurance racer called the Airomorph. He even got some input Audi designer Kris Vancoppenolle.
The Airomorph imagines a future Audi racer for Le Mans that features adjusting fabric panels to fine-tune the car's aerodynamics as it laps the course - a technology inspired by catamaran racing. "I started from scratch and had the freedom to deliver and execute a white space design for the future," said Kim to Autoblog via email. It's also somewhat similar to the idea behind BMW Gina concept, although Kim says that wasn't an inspiration for his design. The body here is made from a single piece of a silver, expansion-resistant material stretched over a frame underneath. The fabric anchors at the wheels, front and rear section with movable cables, and hydraulic actuators pull the wires to shift the aero as needed.
The actual shape echoes Audi endurance racers from the past and present. In profile, you can easily see the current R18 with its arcing cockpit and fin down the rear. Of course, that's interpreted through a little bit of Blade Runner with the covered wheels sticking out from the body. The front shows the rectangular shapes from the earlier R15. There doesn't appear to be any way to actually see out of the vehicle, though.