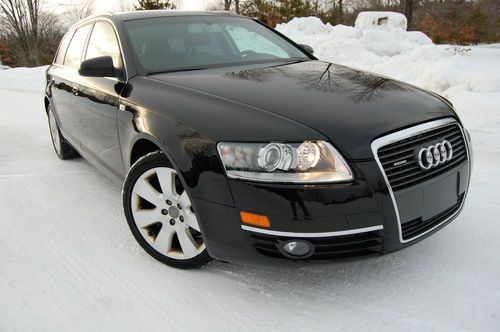 Condition: Used: A vehicle is considered used if it has been registered and issued a title. Used vehicles have had at least one previous owner. The condition of the exterior, interior and engine can vary depending on the vehicle's history. See the seller's listing for full details and description of any imperfections. ...
Up for sale is a 2006 Audi A6 Quattro All-wheel-drive Wagon. This vehicle is in good condition in and out, it comes with Black exterior and premium black leather interior. This vehicle appears to be garaged , body has no major dings, dents or scratches. This luxury A6 Wagon is powered by 255 horsepower 3.2L powerplant and 6-speed TipTronic automatic transmission. Transmission shifts smoothly, engine runs strong, has no leaks, no known mechanical issues. This vehicle comes fully loaded with: power windows, power locks, power mirrors, power seats, memory seat, heated seats,rear heated seats,power sliding glass moonroof, premium leather interior, front and side airbags, Xenon adaptive headlights, premium alloy wheels, luxury wood inlays interior, key less start and entry , MMI/The Multi Media Interface system features a 7-inch color display screen and there is so much more to mention.
The left front tire hes a boble on side wall !!! All Other tirese are in good condition 60% life left on them
Miles: 106943
Vin: WAUKH74F26N080869
IF YOU HAVE ANY QUISTION PLEASE CALL ME AT 231-944-9042 THANKS
Car Sells AS IS No woranty

Audi A3 Clubsport Quattro concept bringing its 525 horses to W?rthersee

It's almost late May, and you know what that means: the last of the snow has melted, the Stanley Cup playoffs are in full swing, the flowers are blooming, and the performance-car faithful are descending on Wörthersee in Austria for the annual GTI-Treffen.
Not only is the Wörthersee Tour (as the automaker calls it) a chance for enthusiasts to show off their rides, it's also a prime opportunity for the Volkswagen Group to show some of its most dedicated customers what it can do. Past meets have given us such notables as the Audi A1 Clubsport Quattro, Volkswagen GTI W12-650 and Skoda Fabia RS 2000 Roadster, to name just a few. And now Audi has emerged as the first VW Group brand to reveal what it has in store.
It's called the A3 Clubsport Quattro, and seems to offer a pretty clear indication of what we should expect of the next RS3. The concept is based on the S3 sedan, but swaps out its 2.0-liter turbo four for a retuned version of Audi's sweet 2.5-liter turbocharged inline-five, retuned to produce a massive 525 horsepower and 442 pound-feet of torque.