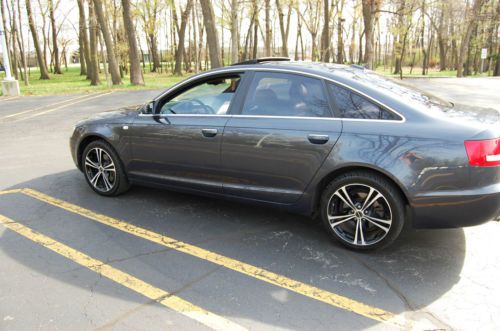 Audi A7 getting nip and tuck

It's been less than two years since the Audi A7 first went on sale in the US, but European buyers have been able to enjoy the sleek and stylish hatchback for twice as long. As such, Audi is preparing to give its A7 a mild refresh with tweaked exterior styling, but we're also expecting some of the features found in the all-new 2015 Audi A8 to possibly trickle down to the A7.
From what we can tell in these spy shots, the A7 is getting a minor facelift that includes a restyled front fascia and new headlights, which will likely boast Audi's new Matrix LED system. At the rear of the car, similar changes have been made with a fascia that now gets integrated outlets and different taillights that have a Lamborghini-like display.
Not apparent in these images - but still a good bet for production - we'd expect to see the new A7 get some of Audi's updated engines or new driver assist technologies. No definite word as to when we'll be seeing the refreshed A7 in person, but considering how close to production ready as this car seems to be, our bet is on the upcoming Geneva Motor Show.

There have been a few, seemingly half-hearted, attempts at reinventing the owner's manual - that thick stack of bone-dry information that you only look at if you're well and truly stumped. Hyundai tried swapping in iPads with the Equus, which didn't really take, while Chrysler switched its owner's manuals to digital form in 2010. Chrysler subsidiary Dodge even released a smart phone app that included all the info contained in the paper manual.
Audi, though, may have taken things to their logical conclusion - augmented reality. While it'll likely be more practical once Google Glass and other wearable tech is adopted on a wide scale, augmented reality allows users to project information on scenes, usually through a phones camera, which is how Audi does it.
Called eKurzinfo, the app looks through your phones camera to identify and explain different parts of the car. According to Metaio, the app's developer, the app recognizes 300 different parts of the car. Our sister site, Engadget, provides the best example of the app's abilities - if you point it at the engine temperature gauge, the app tells you what the gauge measures, and if the reading is too high, eKurzinfo will even show you where to find the coolant tank.