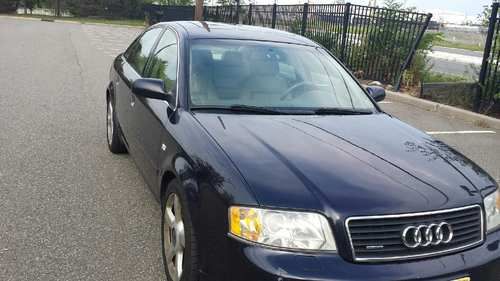 Condition: UsedA vehicle is considered used if it has been registered and issued a title. Used vehicles have had at least one previous owner. The condition of the exterior, interior and engine can vary depending on the vehicle's history. See the seller's listing for full details and description of any imperfections.Seller Notes:"Car has some dings and scratches, nothing really visible as u can see in the pictures."

For sale is a 2003 Audi A6 2.7t quattro, the car is in good shape and well maintained, has no problems, rums good. Has 4 practically new tires, good brakes. I am selling it because i bought a truck, the car has no more use for me and seats there, i use it  on weekend only just to run errands.

Audi R8 bids adieu with the 570-hp Competition in LA

Audi is saying auf Wiedersehen to the first-gen R8 at the Los Angeles Auto Show in the best way possible - the even more powerful, limited edition 2015 R8 Competition. This might be the vehicle's swansong, but it's going out with a bang.
Audi is sending just 60 of these supercars to the US, and the heart and soul is a beefed up version of the 5.2-liter V10 from the V10 Plus model. The mill now makes 570 horsepower, a 20-hp boost, and is mated to a seven-speed, dual-clutch S Tronic gearbox. Audi claims that the potent package shoots the Competition to 60 miles per hour in 3.2 seconds and to a max speed of 199 mph.
The extra ponies might be enough for some, but Audi really wants to make the Competition something special. Matte carbon fiber pieces replace areas around the car, including the rear spoiler, side slides, front spoiler, rear diffuser and center console. For contrast, the wheels and exhaust pipes are painted in high-gloss black. Ceramic brake discs should be a useful aid with deceleration, too.

If you were going to test drive a new car, who would you want to take with you? Your spouse? A friend? Maybe an automotive journalist? Well take it from us: there's one of us riding shotgun just about every time we go to drive anything, and we're not all we're cracked up to be.
How about a celebrity comedian? Well, that largely depends on which comedian we're talking about here. Some - say, Jerry Seinfeld or Jay Leno, for example - might be more helpful than others, being more or less schooled in the finer points of the modern automobile. Adam Carolla might seem like he belongs on that list too, but in this latest video for a friends at Edmunds.com, the one-time host of The Car Show on Speed TV seems bent on being as comedically intrusive as possible. Which may be funny, but helpful? Not so much. See what we mean in the video below, and the next time you go to test drive a new car, you just might find the world's most popular podcast host climbing in with you.