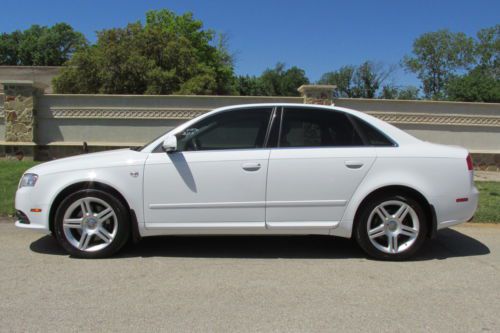 Over in Europe-land, the Audi SQ5 is a diesel-powered monster capable of sending a whopping 479 pound-feet of torque to its wheels. Naturally, this beast isn't coming to the States, but that doesn't mean we're missing out on the whole SQ5 experience altogether. At the Detroit Auto Show this week, Audi is debuting a new gasoline-powered version of the hot crossover, and while it's not quite the oil-burning dreamboat we've lusted after from afar, we certainly wouldn't kick it out of bed.
Instead of a diesel, we get a boosted version of Audi's supercharged 3.0-liter V6, good for 354 horsepower and 346 pound-feet of torque. Running through an eight-speed automatic transmission, the SQ5 will reportedly be able to fire off 0-60 times in the low-five-second range and will top out at an electronically limited 155 miles per hour. Suspension upgrades are on hand to improve road-going prowess, but also lower the Q5's stance a bit, too.
Because this is an S model, there are plenty of visual upgrades on hand, including a more aggressive front fascia, 20-inch wheels and some pretty new colors including Estoril Blue and Panther Black. Interior upgrades like Alcantara trim and aluminum brightwork add to some sportiness from the cockpit view, as well.

Audi A9 Concept teased in video, new design chief tells us what to expect in LA

Audi has just dropped another teaser for the A9 Concept it'll be displaying at this month's LA Auto Show. This time around, instead of one static image, we get a tantalizing video of the showcar narrated by new Audi design chief Marc Lichte.
In terms of the A9, we get a better look at the body form than we've yet seen, and we also sneak a peek at its massive, blocky, turbine-style wheels that the conceptual flagship will wear in Los Angeles.
Lichte also takes this video opportunity as a chance to say how-do-you-do to the enthusiast community, commenting not only on his vision for the A9, but also offering up his bona fides in terms of family racing and art heritage. Get to know the man behind the car behind the sheet, here.